THE MUPPETS and the Art of Bitchcraft 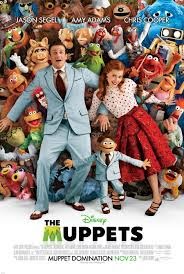 When I’m not writing of my adventures in the dark for you fine folks, I’m a middle school English teacher. Kids this age are a tumultuous lot. Half are still riding bikes, dressing Barbies and playing with Legos, the other half are groping each other in the halls and twerking at school dances. Managing a class of 30 of them thrown together, six periods a day, is definitely a challenge.

The thing about being an educator is you never stop learning. I don’t mean the graduate courses, professional development workshops, first-aid training, constant curriculum changes and other bullshit you’re required to endure throughout your entire career in order to keep your teaching license up-to-date. That’s just hoop-jumping (probably dreamed-up by assholes who resent the fact you have summers off). Since earning my initial teaching degree 18 years ago, I’ve learned two things vital to my career…

First, always follow the lead of the more-experienced teacher in your content area. In my case, that person is Laura, my teaching partner & the closest thing I have to a second wife (meaning I do whatever she says with a nod and a “yes, dear”) for the past 17 years. I learned more from her in my first month as an educator than the previous five years I spent in a classroom training for the job. For those of you just beginning the profession, the sooner you accept the fact your new degree doesn’t suddenly make you Mr. Holland, the better off you’ll be. On a related note, the longer you teach, the more you'll chuckle at the hiring of the young, cocky & idealistic new educators fresh out of college and convinced they’re gonna change the world one child at a time. You’ll spot ‘em easily…they’re the ones wearing sandals.

Second, kids (and their parents) will bitch about damn near anything, especially middle schoolers, and you’ll be the target of their wrath. It’s one thing to piss and moan about having to write an essay, show your math work or read a novel (hell, I did that regularly), but they’ll even complain endlessly about shit totally unrelated to their grade…dress code, tardies, gum in the classroom (for some reason, gum is a huge issue with them, acting like helpless heroin addicts if they’re denied this right). Since they consider you the face of authority, it’ll be all your fault. By the way, as advice to any new teachers, forget about applying logic to refute their complaints. I tried that a few times, informing them that gum once wasn’t against the rules; it was only after it was found stuck under desks, tossed to the floor and smashed in the pages of textbooks that gum was banned, just like robbing a bank wasn’t illegal until someone actually did it. I thought I was articulate and clever, but was simply met with blank stares or claims they wouldn’t do the same thing (kind-of like people bitching a about gun control because they’ve never personally shot anyone). And again, these kids always act like I’m the one oppressing them.

The bitching doesn’t stop there. We get complaints from the gallery even when we’re rewarding them. Case-in-point, as of this writing, the school year is drawing to a close and our curriculum forced us to schedule the district writing assessment at the end of the year; Laura and I made an arrangement where students who needed that last day of school to finish would go to her room, and those who were done early would come to my room and celebrate the year’s end with a movie. Initially, I thought I got the better end of the deal, popping-in a DVD to entertain them while I scored papers, entered final grades or surfed the internet (mostly the latter). In an effort to placate the masses while bound by the district rule of only showing G or PG films, I brought three recent movies which kids could choose from, Frozen, The Croods and The Muppets.

Three classes in a row voted for Frozen, which I incorrectly assumed everyone would be sick of by now (as a father of two Disney-junkie daughters, I was growing weary of it myself). Sure, a few kids bitched (guys too cool to raise their hands during the voting process), but not only was it what the majority wanted to watch, they sang along and even recited much of the dialogue with the characters. It was like a pre-teen version of The Rocky Horror Picture Show and initially kinda cute (there's nothing like a good Disney movie to bring out the little kid in everyone). But by the third class, I was ready to pull my hair out. Too much of anything in a single day, even a movie as wonderful as Frozen, can be harmful to one’s health…not my health, but the kids belting-out “Let it Go” as loud as possible and me with a baseball bat handy in a closet only three feet away.

For the sake of my own sanity and their survival, I removed Frozen as one of the choices for the remaining classes. This was when the bitching commenced in earnest, after informing the next class their choices were The Croods or The Muppets. Some kids groaned and rolled their eyes as though I just assigned a 500 word essay.

“Would you rather be in Mrs. Queen’s room scrambling to get your work finished?” I retorted, refraining from adding, you fucking little ingrates.

This seemed to shut most of ‘em up, except Mike, who’d been a pain in my ass all year (always blurting out whatever popped into his head before actually thinking first). He quipped, “But these are stupid kids’ movies.”

“Sorry, big man,” I replied. “I guess you’ll have to wait ’till you get home to watch Bikini Car Wash again.”

Most of the class laughed, which immediately shut Mike up, flush-faced and humbled. As an educator, I’m not supposed to admit this, but there’s sometimes a great deal of satisfaction in cleverly burning a smart-ass kid in front of the peers he's trying to impress.

Anyway, The Muppets got the majority vote by only one hand. More groans erupted from a few kids, one who contemptuously spat, “I hate Muppets. They’re stupid.” (he was from Laura’s class, and another one of those too cool to raise his hand).

I nearly popped a blood vessel, but bit my tongue.

Okay, I understand some people may not have liked The Muppets (though until now, I’d never met any), but a blanket statement declaring your dislike of all things related to Jim Henson’s beloved creations? This kid must have some faulty wiring, because who the hell doesn’t love the Muppets? Even some of the would-be gangstas in class looked at him funny.

There’s a short list of things in our culture we justifiably assume every right-thinking individual loves:
If you happen upon someone who declares a genuine dislike for anything on that list, walk away and don’t look back. They're bad people.

Anyway, I popped The Muppets into the DVD player and went back to finishing my grades for the year, occasionally looking up at Mike and this other Muppet-hater, silently hoping the Oscar-winning song, “Man or Muppet,” was now part of their own personal Hell.

Maybe it’s me, but I don’t get the whole bitch-about-everything mindset so many self-centered assholes embrace. Whenever HBO or Showtime offers me free weekends, I don’t piss and moan over what they offer. They don’t owe me a free weekend, just like I don’t owe these kids a movie on the last day of school. Whether they like the movie or not makes no difference to me, so I’m not sure what they think they stand to gain from complaining about it.
Posted by D.M. Anderson at 11:12 PM