Blu-Ray Review: THE WRATH OF VAJRA 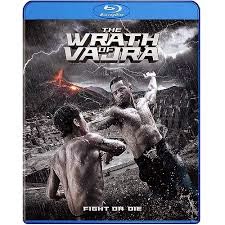 I should probably confess up-front that my knowledge of Asian martial arts cinema is pretty limited…Enter the Dragon, of course, a few of Jackie Chan’s early Hong Kong films, Stephen Chow’s action comedies and House of Flying Daggers (which I loved)…that’s about it. I’ve enjoyed the few films I’ve seen in the genre, but I’m essentially about as clueless of martial arts movies as my dad is of heavy metal music, even though, as a teenager, I once caught him rocking to Judas Priest’s British Steel when we were in the car together (which I’m sure he’ll deny to this day). But just because Dad liked what he heard didn’t mean he was a converted metal fan. If you were to mention Rob Halford’s name right now, he’d reply “Who?” like the unwise owl in that Geico commercial.

Similarly, I don’t know (or care) who Yu Xing & Sung-jun Yoo are. For all I know, they are China’s Bruce Willis & Vin Diesel (Yoo is even built a bit like Diesel), but The Wrath of Vajra is the only thing I’ve ever seen them in. In this one, there’s an evil, Hades-worshipping cult which kidnaps children and trains them to be lethal warriors in hopes of defeating the Chinese during World War II. One of those children (played by Xing) manages to escape and embraces Buddhism’s peaceful ways (though he can still snap your neck if you piss him off). A decade later, the Hades Cult, led by Xing’s former friend/rival (Yoo), is hell-bent on overthrowing China with his trained and psychotic legions. After Xing’s little brother is kidnapped, he returns to the fortress to try and free everyone (kids and POWs). In the interim, there are fight scenes galore, complete with John Woo-style slow motion, gravity-defying stunts and plenty of blood spewing from mouths after every punch.

Storywise, The Wrath of Vajra is sorta lame and a bit too serious, serving mostly as an excuse to show guys beating the shit out of each other. But when has actual plot been the driving force behind a martial arts movie? As such, the numerous fight scenes are well-done and expertly choreographed, good enough that you probably won’t give a damn about the story, with its obvious twists and the idiotic ‘Crazy Monkey’ showdown (which we’re led to anticipate as the mother of all fight scenes).

Did I like it? Absolutely. This movie is fun, though ultimately forgettable, much like how my dad felt when toe-tapping and humming along with Priest’s “Living After Midnight.”  He enjoyed the music while it was pumping from our car speakers, but it ain’t like he suddenly became a metal fan. I’m sure he hasn't given Judas Priest a single thought since. Like Dad, I enjoyed The Wrath of Vajra, a lively action fest, but it didn’t suddenly make me a die hard martial arts fan.

However, for those of you already converted, you might consider yourself preached.