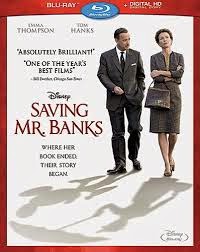 After watching Saving Mr. Banks, I’m a bit surprised it received only a single Oscar nomination (Best Score, by Lionel Newman). No, it wasn’t the best picture of the year, but considering the Academy can select up to ten films, but only chose nine this year, it was certainly worthy of that tenth spot. Maybe it isn’t as gritty, quirky or intense as the other somber selections, but it’s beautifully shot, well-written and features terrific performances (Emma Thompson, in particular).

Maybe it was because of how the story itself is told, which chronicles the quasi-antagonistic relationship between Walt Disney (Tom Hanks) and author P.L. Travers (Thompson) during his attempts to convince her to sign-over the film rights to her novel, Mary Poppins. I’ve read some criticisms that Saving Mr. Banks is too whimsical, too Disneyfied and perhaps an overly-romanticized account of what really occurred. It has been well-documented that Travers never cared for Disney’s iconic version adaptation of her novel, but you wouldn’t know it from this film.

Or maybe it was because the movie isn’t really about Walt Disney himself. The man is easily one of the most intriguing people to ever work behind the scenes in Hollywood, and the Academy has historically loved biographical tales of major players in the movie business. But even though Disney is a major part of Saving Mr. Banks, this is Travers’ story, and it isn’t a true biography of her either. Instead, we’re introduced to a frankly-snobbish writer, contemptuous of Americans and fiercely-protective of the characters she created, to the point where she is a constant thorn in the side to those at Disney Studios trying to bring her only world-renowned novel to the screen. She initially comes off as arrogant and difficult. We don’t like this woman at all throughout the first half of the movie. But through flashbacks showing her upbringing in Australia and the relationship with her loving-yet-alcoholic father (Colin Farrell, who’s never been better), we understand why she’s so protective of the novel and its characters (Mr. Banks, in particular). We also learn why her book was so near and dear to Walt's heart for so many years.

I don’t know whether or not this is an accurate depiction of what happened on the Disney lot back in 1961, nor do I care. For all I know, Walt Disney himself was one of the most abusively-powerful, heartless and greedy pricks ever to stalk Hollywood. Do I want to see that side of him? Hell, no, and I find it hard to believe anyone else does either, which is why Tom Hanks (incapable of hatred from anyone) is perfect in the role, even though he looks nothing like Walt.

Saving Mr. Banks makes no claims of total historical accuracy. It remembers it’s supposed to be entertainment first, history lesson last. As such, Travers & Disney (and every other supporting character, for that matter) are wonderfully-realized creations who touch us on a personal level, no matter how far-removed from their world we might be. Their story is poignant and charming, with a bittersweet, nostalgic tone underlying everything. Unless you’re a complete cynic (like the Academy apparently is), this is a hard movie to dislike.

EXTRAS:
The Walt Disney Studios: From Poppins to the Present (a sentimental look back at the studio during the last few years of Walt Disney’s life)
“Let’s Go Fly a Kite” (cast & crew members sing the famous song in honor of its composer, Richard Sherman, who plays along with them)
Deleted Scenes