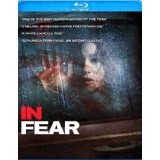 A damn shame, this one.

Imagine going to a fancy Italian restaurant. The ambiance is perfect, the service is impeccable, the wine list is second-to-none, but when the main course arrives at your table, it’s nothing but a pepperoni Hot Pocket…and undercooked at that.

That’s what watching In Fear is like. I can’t recall the last time a movie started off so well, establishing a subtly foreboding tone, slowly-but-effectively ratcheting up the tension, only to completely fall apart half-way through.

But, damn, does it start off great. Iain De Caestecker & Alice Englert play Tom and Lucy, a young couple driving to meet their friends at a music festival. Before that though, Tom surprises her with reservations at a secluded hotel. All they have to do is find it. After being guided by a mysterious truck driver, they turn off the main road to find the place. However, the signs contradict each other and they become hopelessly lost in a maze of muddy roads and dead ends, almost always ending up at the same place they started…a grimy old cabin in the middle of nowhere. As it gets darker and they run low on gas, frustration turns to apprehension and fear, especially after Lucy sees a masked figure behind Tom while he’s taking a leak. There’s something following them through this wooded labyrinth, and it’s not friendly.

Up to this point, In Fear is atmospheric, suspenseful and well-acted…a low budget gem which uses its Irish country setting to build increasing dread in the viewer. Like so many other movies which effectively exploit the isolation of lonely roads and lone travelers to create tension (Duel, The Hitcher…even Jeepers Creepers), one understandably expects a bit of cat & mouse terror will ensue.

It's also at this point I recommend you shut off the movie and write your own ending, because even if you threw in brain-sucking lesbian zombies with poo-flinging monkeys on their shoulders, it would be more entertaining and less insulting than what transpires next...

Once our villain actually shows up, the entire movie collapses faster than a stack of Jenga blocks. The characters are suddenly rendered stupid, logic flies out the window and the story itself is undone by plot holes you can steer a semi-truck through. Though totally unoriginal, I’ve got no problem with the idea of a lone psycho in the backwoods, so long as his methods, motives and actions are at-least plausible. But In Fear doesn’t even try to explain how he’s able to effectively manipulate the scenario. In fact, when he does finally reveal himself as the culprit behind their torment (in the back seat of their car, initially posing as a fellow victim), all he does is grab Lucy’s head in his hands, which turns Tom into a blithering idiot on the verge of pissing himself (couldn’t the writer have at least given his bad guy a fucking weapon?). The actions of all three characters becomes more frustratingly illogical as the movie goes on. Too bad…all that effort to create atmosphere and tension, only to suddenly wallow in stupidity, clichés and ridiculous behavior by characters initially-established as somewhat smart and likable.

I don’t often offer my own two-cents worth when it comes to storytelling, but In Fear could have been a low-budget classic if it kept the tone and ambiguity of its first half, perhaps offering no concrete explanation for Tom & Lucy’s wayward journey. Or hell, offer aliens…or a government experiment…anything other than the insulting conceit conjured up here.

In Fear is a real let-down, far worse than a movie which is crappy from the get-go, because this one started off so promisingly.

EXTRAS:
In Fear: Behind the Scenes