HALLOWEEN III: SEASON OF THE WITCH and the Animal Way 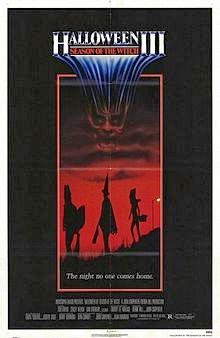 My wife and I were at Big Lots one day in the pet supply section. She suggested getting our dog, Murphy, a little bed to put in the corner of our bedroom where he often chooses to sleep. I agreed, enamored with the idea of our little pooch enjoying a warm, secure place to call his own, and a definite improvement over the cold floor. We found a soft, plushy mat that was reasonably priced, then headed home.

Excited to see what Murphy thought of our gift, I quickly moved his toys from the bedroom corner, laid the bed down and called him in.

After a couple of quick sniffs, Murphy hoisted his leg and peed on it before trotting from the bedroom, making it immediately clear he was not impressed.

At first I thought, you ungrateful little shit. But that was me being momentarily guilty of assuming we were on the same page, which people and pets never are. When people receive a shitty gift from a loved one (like when my grandmother gave my wife and I matching sweatshirts for Christmas which pictured cuddly kittens with the words, ‘Best Friends’), we tend to remain congenial until said-gifters leave the house. Animals aren’t equipped with the same tact.

They aren’t gifted with speech either. It ain’t like I was able to ask Murphy if he wanted a doggy bed, nor would he be able to reply, “No, Dave, I’m good.” Unbestowed with tact or speech, upon inspecting this gift he didn’t ask for, Murphy communicated the only way he knew how…with urine. As pissed as I was (no pun intended), part of me had to admire Murphy’s innate ability to convey what he was thinking without a single word. He clearly made his point with the simple hoist of a leg, which is more than I can actually say about most people.

Dogs aren’t the only species able to communicate through bodily functions. My cats keep other felines away with a flick of the tail and a quick spritz of piss. Then there are Monkeys, who take this concept of communication to another level. Because they’re bipedal and blessed with thumbs, monkeys can really voice their displeasure by flinging handfuls of their own poo.

Unlike our pets and primate cousins, evolution has allowed humans to abandon the use of body waste to express ourselves (well, most of us, anyway). That’s mostly a good thing. I shudder at the thought of my wife getting the last word in an argument with an arsenal of ass ammo (I’ll take the silent treatment any day). And while freely peeing outdoors is one of the most liberating perks of being a guy, being required to stave-off intruders by regularly squirting all over my property is a burden my bladder ain’t prepared for, though it would justify drinking more beer (I know, honey...it's my sixth one, but I'm doing it for you and the kids).

On the other hand, presidential debates would be a lot more entertaining. Rather than a war of words, they could engage in a war of waste…whoever pelts their opponent most wins.

And you know that oblivious douchebag at work who manages to make everyone’s job just a little harder? Rather than waste your time confronting him with words he won’t hear anyway, it stands to reason that a barrage of butt nuggets would send a stronger message. It would also be supremely difficult for him to come up with a reasonable retort while being pummeled with shit.

Strategically-tossed turds can be worth more than a thousand words.

Consider what you’re reading right now. Some of you are probably wondering just when the hell I’m actually going to start talking about Halloween III, the only film in the original franchise which isn’t about Michael Myers slaughtering people in his hometown of Haddonfield. If we were locked in a room together and you were forced to listen to my verbal vomit, wouldn’t you consider whipping a turd in my direction to declare your impatience, especially if you think Halloween III is a great film and are anxiously awaiting someone to confirm your good taste?

Halloween III has its small share of admirers who applaud the attempt to do something different with the brand name, but it’s not a great film. Plotwise, it’s arguably the dumbest in the entire franchise (which is saying a lot). Tom Atkins plays Challis, a boozing doctor vexed by the gory death of a former employee of Silver Shamrock, the company which produces a popular series of Halloween masks. The victim’s daughter, Ellie (Stacey Nelkin), comes along, convinced something is amiss and plans to head to Santa Mira (where the Silver Shamrock factory is located) to find out what’s going on. Even though he’s a practicing surgeon at a hospital, and the Shamrock employee’s death has no significance on any other patient, Challis decides to drop everything and tag along with her. Admittedly, I might have done the same thing because Nelkin is pretty easy on the eyes, though this plot development does not explain Ellie’s out-of-the-blue sexual attraction to Challis at a motel in Santa Mira. Hey, I’m willing to accept a lot of mismatched Hollywood hook-ups for the sake of a story (even Harrison Ford and Anne Heche), but while Tom Atkins is a fine character actor, not only is he twice Nelkin’s age, he’s beady-eyed, pockmarked and looks like that creepy uncle in every family who reeks of Old Spice and hugs his nieces just a tad too long. Challis and Ellie’s sudden motel tryst seems more like a reason to show her boobs than character development.

But hey, titillation is a big part of most horror films, so as creepy as this sex scene is, I was willing to accept it. Other details were tougher to swallow. For example:
Of course, if you dig hard enough, you can find an equal number of plot holes in any movie, leaving some of you to wonder why I’ve chosen to fling my metaphoric poo at Halloween III. A good question when you consider, despite the plot holes I just listed, Halloween III isn’t actually all that bad. In fact, there are literally hundreds of cinema suppositories more deserving of my rectal wrath than this one. The biggest problem with Halloween III is that it's called Halloween III.

But remember that, in 1982 (when the film was released), the popularity of slasher horror was at an all-time high, mostly thanks to the original Halloween. We kids understandably assumed anything titled Halloween III would provide more of the same. Instead, we got a deliberately-paced, moody tale of robots, witches, dark magic and old folks trying to save the day. Not a single killer in a Shatner mask to be found! If I'd have made my point back in 1982 by throwing my own shit at the screen, I’d have been tossed out of the theater (and probably arrested), but at least there’d be no ambiguity regarding my opinion.

But that was simply my first impression. Murphy eventually warmed-up to his new bed, and now sleeps on it every night. Whether it was grudging acceptance or a change-of-heart, the bottom line is he no longer feels the need to piss on it. I feel similarly about Halloween III  today. Despite its faults, I learned to accept it as a pretty decent film, so I guess its a good thing we've evolved from our poo-flinging ancestors.
Posted by D.M. Anderson at 9:13 PM