Blu-Ray Review: THE TRUTH ABOUT EMANUEL 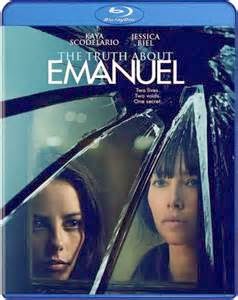 Looking at the artwork and synopsis on the cover of The Truth About Emanuel, you’d naturally assume it’s some sort of psychological thriller or supernatural ghost story. That assumption would be wrong. While there is indeed some haunting imagery and an occasionally eerie music score, it’s actually a deliberately-paced  - sometimes arty & pretentious - psychological drama of two young women emotionally scarred by tragedy.

Emanuel (Scodelario) is a moody 17-year-old living with her father (Molina) and stepmom (O’Connor). Even though she never knew her personally, Emanuel has never gotten over the death of her real mother, who died during childbirth. She’s emotionally cold to her stepmom and repeatedly torments her father by making him recall the events surrounding her mom’s death. Meanwhile, she begins dating Claude (Barnard), a relationship that’s tumultuous, to say the least.

Then free-spirited single mother Linda (Biel) moves in next door, who looks uncannily like Emanuel’s mom (a plot point played-up in the synopsis, but has no real baring on the story). Linda looks and acts like a new age hippy (she’d fit right in selling hemp clothing at a Saturday market). Wanting extra cash, Emanuel volunteers her services as a babysitter, but discovers Linda has a dark secret regarding her baby (a plot point I wouldn’t dream of giving away, but let’s just say Linda has a few loose screws). But rather than turn away, Emanuel develops a loving relationship with Linda that she never could with her own family, because both have experienced loss which had a huge impact, not only on their lives, but how they interact with others. The film ends with an emotionally-poignant resolution, where the viewer assumes they’ve both finally come to terms with the tragedies which have tormented them.

Once I lowered my expectations and accepted the fact that The Truth About Emanuel isn’t a thriller (with it’s overly-symbolic scenes involving water, it obviously aspires to be an art film), I found it sporadically interesting, particularly the scenes involving Emanuel and Linda alone together. We feel a true friendship and mutual develop between them, even when no words are spoken, to the point where outside characters become almost intrusive. Speaking of which, I could have done without the subplots (i.e., Emanuel’s relationships with her family, co-worker and Claude). Maybe I’m missing something, but even though I’m sure this was built in to contrast her friendship with Linda, Emanuel mostly comes across in these scenes as a shallow, unlikable, emo teenager incapable of looking beyond herself. The climax of the film has a lot of emotional heft and a great payoff, but it takes so long to get there that I can’t help but think the whole thing would be more effective as a short subject, without the subplots weighing it down.

But despite its misleading ad campaign, arty pretensions, padded running time and clumsy asides, The Truth About Emanuel has a good story worth checking out at least once. It features effective performances (Biel has never been better), deft direction and a few wonderfully surreal moments.