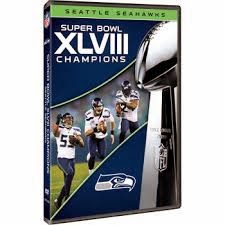 It’s probably pertinent to point out that I’m from the Pacific Northwest, a region with relatively few pro sports franchises compared to the rest of the country. In fact, there are only three that really matter…the Portland Trailblazers, Seattle Mariners and Seattle Seahawks (sure, there are a couple of pro soccer teams, but only because some folks are still hell-bent on trying to convince Americans to care about soccer). For those of us who live in the blustery, sparsely-populated states of Oregon, Washington and Idaho, the Blazers, Mariners and Hawks are the closest things we have to home teams.

So it’s understandable if one suspects a bit of bias in my praise of this disc, which lovingly recaps the Seahawks’ 2013 championship season, climaxing in the shocking 42-8 route of the Denver Broncos in Super Bowl XLVIII. It’s also understandable if anyone living elsewhere doesn’t give a damn about a DVD like this, either because they have their own home teams or resent the overt brashness of the Seahawks (mostly Richard Sherman) during the 2013 season. Then there are the loud, boisterous fans (“The 12th Man“), whose behavior admittedly borders on obnoxious at times (especially when the 49ers visit). Heads and bodies painted green and blue, they fill CenturyLink Field every Sunday with a deafening roar that intimidates all opponents who enter (except the Arizona Cardinals, the only team to leave the Hawks’ Nest with a victory in nearly two years).

Besides, NFL Films produces a disc like this for every championship team. What makes this one so special? My own personal bias notwithstanding, it’s a triumph-of-the-underdog story as dramatic and rousing as any fictional sports film ever made…especially when you take history into account:


The disc itself is a well-edited summary of every game during the 2013 season, featuring highlights presented as only NFL Films can…dramatic music, sparse-but-authoritative narration, on-field & sideline soundbites and dozens of outstanding defensive & offensive plays lovingly rendered in slow motion. The capper, of course, is Super Bowl XLVIII, where the Hawks played about as flawlessly as any team in NFL history (as a bonus for Hawks fans, there are a lot of shots of a dumbfounded Peyton Manning). It was one of the more lopsided Super Bowl games in recent memory (the outcome was pretty-much decided by halftime), and unless you live up here in the Northwest, will probably go down in history as one of the worst.

Even if you can’t stand the Seahawks, their fans or the bravado of both, if you love the game itself, this disc recaps a phenomenally impressive season, depicting a team where anything less than the Lombardi trophy would have been considered a failure. It’s the perfect souvenir for a nearly-perfect season.

I’ll bet it doesn’t sell many copies in Denver, though.

for Broncos or 49ers fans: