SCANNERS and the Fate of Mr. Baggy Pants 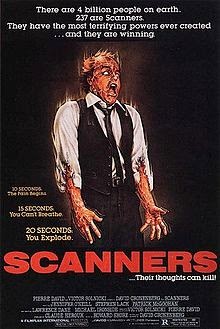 My family and I shuffled into Burger King for lunch one weekend afternoon, tired and hungry from running errands all day and thinking a quick bite was in order. The place wasn’t busy…just one older guy in baggy pants hovering over the lone open register, and two ladies gabbing with each other ten feet away, whom I assumed were waiting to order. So we stood behind them, patiently waiting our turn. After several minutes, these two chatterboxes made zero attempt to move forward. In the meantime, someone else came in and promptly stood behind Mr. Baggy Pants at the counter.

Perplexed, I asked these two ladies, “Excuse me, are you in line?”

One gave me a casual glance. “No, sorry,” before both stepped out of the way and continued their conversation, oblivious to the fact their self-absorption (and my courtesy) resulted in several minutes out of my life I’d never get back. Because I was with one of my kids, I refrained from blurting out, “Then what the fuck are you standing there for?”

Anyway, several more minutes later, the individual who had just come into the place and inadvertently cut in line grew tired of waiting for Mr. Baggy Pants to finish ordering. She left in a huff, probably wondering why the second register wasn’t open. We quickly moved forward, stomachs rumbling impatiently. Then I discovered what was taking so long…Mr. Baggy Pants had a half-dozen wrinkled Burger King coupons on the counter and was spending all this time trying to negotiate the best deal possible, repeatedly challenging the woman behind the counter with various coupon combinations in an apparent attempt to get his fucking meal for free.

Jesus Christ, he was buying lunch, not a goddamn car.

Mr. Baggy Pants continued glancing up at the menu, down at his coupons and back again. My blood came to a rolling bowl, tempered only by my wife's more leveled head. While I have nothing against people using coupons, if your effort to save a dollar or two impacts the lives of those around you in any way whatsoever, you’re an asshole, no better than an oblivious fucknut who drives ten miles under the speed limit on a highway, not-once checking his rearview mirror to notice the convoy of cars stacked up behind him.

It got worse. The two gabby ladies were part of Mr. Baggy Pants' family. They walked up to remind him of everyone’s special requests, gesturing to the seating area where three slack-jawed kids sat, staring at nothing in particular and looking like the simple act of breathing took a supreme amount of concentration.

“Oh yeah,” nodded Mr. Baggy Pants before turning back to the woman at the register (who had the patience of Job) to finally start ordering. Speaking slower than Ben Stein after a bong hit, he began to rattle off his order, every-single item being “extra-this” or “minus-that” or “can I substitute this instead of this and still use my coupons?”

The real kicker was his last item…a Whopper, minus everything except ketchup. After spending 10 minutes dickering like a flea market bargain hunter in order to save a few bucks, he orders a Whopper with nothing on it, even though simply asking for a couple of plain hamburgers would have been far cheaper.

When it was - finally! - our turn, we managed to rattle off our order in less than a minute, then got our cups, napkins and straws. Unfortunately, we made the fatal mistake of finding a table before filling our drinks.

For those of you who don’t get out much, Burger King has replaced traditional drink dispensers with a computerized touch-screen machine that offers dozens of beverage choices. For example, the Coca-Cola button alone lets you choose from Coke, Diet Coke, Cherry Coke, Diet Cherry Coke, Vanilla Coke, Diet Vanilla Coke, Cherry-Vanilla Coke, Cherry-Vanilla Diet Coke, Lime Coke, Diet Lime Coke…you get the idea. There are also buttons offering an equal variety of Fanta, Sprite, Powerade and Minute Maid flavors. This particular Burger King had only one such machine, and guess who was standing there in front of us, cup in hand and hell-bent on hitting every single button to mull over the beverage choices…

…Mr. Baggy Pants, staring stupidly at the display screen as though trying to decipher alien code. In fact, our entire fucking food order was ready before he chose his drink.

On a side note, Mr. Baggy Pants & family also emptied out the ketchup dispenser. This wasn’t actually their fault, but the fact they got the last of the ketchup only added to my developing assessment that these people were polluting the gene pool.

Anyway, as we sat down to eat, Baggy Pants’ order came up (their 8 billion special requests may have had something to do with us getting our food first). While this family of mouth-breathers loudly chattered amongst each other or bellowed into cell phones, I watched in morbid fascination as Mr. Baggy Pants lumbered to the counter, picked up his two trays and returned. As he started to distribute the food to his brood, he bent over, his giant ass-crack peeking from pants just a few inches from the face of a guy at the next table. What’s distressing is the Baggy Pants family could have chosen from a number of empty tables far removed from everyone else, but decided to plant themselves right next to this poor bastard, who’ll likely never be able to unsee this stranger’s hairy ass whenever he orders another Chicken Sandwich.

The entire Baggy Pants family wolfed down their food in less than ten minutes, leaving all of their soiled wrappers, napkins, trays and ketchup containers behind for someone else to clean up.

At this time, I was convinced these were the worst people ever.

I was morbidly fascinated that an entire family could consist of such awful people, mostly because, in my rage at their total indifference to the world around them, I found myself longing for some movies to be real…

Meaning, if I were a Scanner, each head of the Baggy Pants family would have exploded, one by one, as they filed out the Burger King door.

Back in 1981, a Scanner was something different from the machine on your desk used to convert vacation photos you never look at into computer files you never look at. Thanks to director David Cronenberg, the twisted Canadian director whose current films display enough artistry to wow critics, but just enough nastiness to polarize audiences, a Scanner was someone with the unique ability to telepathically will someone to do what they want, or make them spontaneously explode.

Scanners was Cronenberg’s first movie to make a real impression on mainstream audiences, mainly due to an early scene in which megalomaniac telepath Darryl Revok (Michael Ironside, in the role which forever-cemented him as a go-to bad guy) literally wills another man’s head to explode. This gory (and still-convincing) scene has since-become iconic, partially because it’s symbolic of the type of body-horror Cronenberg later explored more graphically in films like Videodrome and The Fly, but mostly because absolutely no one in the audience knew it was coming (like the chest-bursting scene in Alien).

After that, the rest of the film consists of convoluted industrial espionage (with a terrible performance by Stephen Lack as Cameron Vale, the ‘good’ scanner trying to thwart Revok’s plan of world domination). Even the equally-gruesome Scanner showdown at the end is anti-climactic compared to seeing some poor rube’s head fly apart in loving slow motion. In 1981, sitting in a packed house at our favorite second run theater, Cinema V, that classic scene drew a myriad of noteworthy responses. Lots of people gasped, one lady ran from the theater clutching her mouth, while my buddy, Clay, pumped his fist in the air and roared, “YEAH!”

It's admittedly an audience-rousing scene, and for pure shock value, Cronenberg has never topped it.

Scanners is also one of the relics from my impressionable youth which still comes to-mind when confronted by people like Mr. Baggy Pants, whose oblivious self-absorption at Burger King made his every action so aggravating.

Some of us more maladjusted movie geeks have probably fantasized about being as cool and kick-ass as Snake Plissken, as quick-with-a-quip as John McClane or as hell-bent on revenge as Mad Max. But to have the power to make assholes' heads explode? Man, that’d be a priceless gift, one which I sometimes wish was bestowed upon me.
Posted by D.M. Anderson at 9:43 PM