AIRPORT 1975 and an Introduction to Irony 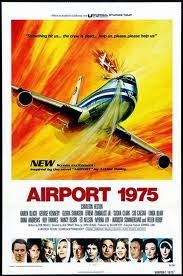 Time for the Lightning Round, kids, where the points can double!

Think fast…Linda Blair! When you hear that name, what’s the first movie that pops into your head?

Any title other than The Exorcist? If you’re of a certain age, unless you’ve lived in a pop culture vacuum during the past 40 years, of course not. If you aren’t of a certain age, you probably don’t know who the hell I’m talking about.

As a public service to the latter, Linda Blair rocketed to stardom for her performance as Regan McNeil, the demon-possessed child in The Exorcist. She was 14 at the time, and like most child stars flushed with instant success, she went on to do almost nothing anyone remembers or gives a damn about (OK, a few of us might remember Exorcist II: The Heretic, one of the great comedies of the 70s). The few times Blair’s name has crept back into public consciousness since then have been Exorcist-related, either movie spoofs or appearing as herself in horror-based reality shows.

More than any other actor involved with that classic 1973 film, Linda Blair is synonymous with The Exorcist. For a time in the mid-70s, Blair was the true face of horror, so much so that when she appeared in Airport 1975 a couple years later, the irony of her role was not lost on me, even though I’d never heard the term, ‘irony.’ But as someone once famously said, “I can’t define pornography, but I know it when I see it.”

Airport 1975 was part of the Holy Trinity of disaster films released in 1974, The Towering Inferno and Earthquake being the other two. All three were box office smashes, which of course encouraged Hollywood to milk the genre dry over the next few years. Airport 1975 was the only sequel of the bunch (the original Airport, released in 1970, was more like a soap opera than a true disaster movie). But in another example of irony, Airport 1975 plays like it's inspired more by The Poseidon Adventure than the original Airport, eschewing many of the soapy subplots to focus on the action, which involves a mid-air collision between a 747 and a small twin-engine plane. The pilots are either dead or injured, leaving it up to crossed-eyed stewardess Karen Black to pilot the plane until Charlton Heston can drop in for a rescue (via mid-air transfer); we can’t allow a woman to land the plane, can we? Much of the movie’s budget must have been used to secure the all-star cast, because Airport 1975 looks like it was made on-the-cheap. There were made-for-TV movies with more convincing special effects.

As a die-hard disaster buff with limited personal resources, I didn’t actually see this film until a year later, when it was the bottom half of a double bill at the trusty old Cinema V, a second-run theater within biking distance of my house. Even though I hadn‘t-yet seen The Exorcist, I was already well-aware of  its legend (audience members fainting, barf bags, nasty-ass dialogue spewed by a kid our age). And obviously, I definitely knew who Linda Blair was.

So when she showed up in Airport 1975 as a sunny, nose-scrunching, perpetually bubbly child in need of an organ transplant, I laughed. It’s a terrible performance. But the true irony comes later, when a nun, played by popular 70s singer Helen Reddy (whose hit, “I Am Woman“ was a clarion call to feminists worldwide), shows up to sing to her. We’re watching a religious figure serenade someone famous for violating herself with a crucifix.

I got a lot of chuckles out of that. In fact, me and my friends started talking back at the screen at the time, grunting “Your mother sucks cocks in Hell!” whenever Linda Blair showed-up in every scene afterwards.

Historically, there's been wonderful stories rife with irony. Who didn't love the tragicomic outcome of Guy de Maupassant’s “The Necklace,” or the twist endings of Rod Serling’s Twilight Zone episodes?

The only thing better than irony is accidental irony, like the casting decisions made for the entire Airport franchise. After all, Dean Martin was a pilot in the original Airport, even though he was as renowned for his drunkenness as his singing or acting ability. And what about Christopher Lee, known worldwide as Hammer Films' greatest villain, cast in Airport ’77 as the most helpless and sympathetic character in the movie? Then there’s George Kennedy as Joe Patroni, the only character who appears in all four Airport films. Even though he’s arguably the least attractive main character in the franchise, he’s the only one who appears in a sex scene (a tryst with a hooker in Airport ‘79). By the way...yeech!

Linda Blair is only a few years older than me, so I kinda grew up with her. She’s still pretty damned adorable, by the way. If I were to bump into her now, aside from asking her to be my bride, I’d inquire if she ever grasped the irony of her role in Airport 1975, and whether or not she had the urge to blurt-out “Your mother sucks cocks in Hell!” while Helen Reddy was serenading her.