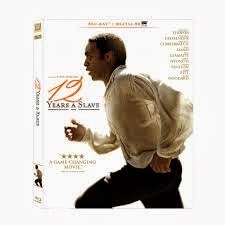 Lucy, my youngest daughter, came into the room about half-way through this movie, plopped on the couch and asked what mom & I were watching. I told her it was a film about slavery and, based on the disturbing scenes of cruelty thus far, added that she might not want to see this. I was reluctant to make her leave because she was already learning about slavery in school. At the same time, 12 Years a Slave is often pretty relentless, and while I did let her stay, I insisted she close her eyes during the lengthy and brutal whipping of Patsey.

Towards the end, Lucy said, “Wow, white people sucked back then.”

Yes they did, though I don’t believe that was the message of the film.

I’m still not sure how to feel about 12 Years a Slave, the Oscar-winning account of the darkest chapter in American history. I hear folks mentioning it in the same breath as Schindler’s List and The Passion of the Christ, another historical epic which pulls no punches in depicting man’s capacity for evil and cruelty. This is the kind of film critics and supporters urge everyone to see (regardless of age), a cinematic history lesson most moviegoers feel more obligated than excited to endure.

The subject matter alone made it a shoe-in to win a Best Picture Oscar. Was there ever any doubt? The Academy loves stuff like this. A few members even admitted they selected 12 Years a Slave for Best Picture without actually having seen it; they didn’t want to endure the film themselves, but knew the subject matter was important. It makes one wonder if the same thing happened with other “important” films which took home a Best Picture trophy in the past, which might explain how Dances with Wolves managed to beat out Goodfellas in 1991.

I’m kinda making it sound like the movie sucks, which couldn’t be further from the truth. 12 Years a Slave isn’t the emotional sledgehammer of Schindler’s List, but not as shamelessly manipulative as The Passion of the Christ, either. It is quite a harrowing journey though, sometimes infuriating, sometimes heart-wrenching and (with its scenes of physical and psychological cruelty) sometimes tough to watch.

Because the widespread evil of slavery is simply too overwhelming to tackle on a large scale without coming across as a history lesson, director Steve McQueen wisely chooses the Spielberg route, making it a deeply personal story of one man. In this case, we follow Solomon Northrop (Chiwetel Ejiofor), a free black man who’s duped by opportunistic con men, who end up selling him down south. What gives the movie emotional heft is the fact Solomon is as shocked at the treatment of slaves as we are. He’s also forced to hide the fact he is well-educated and far more intelligent than his owners in order to survive, during which time we watch him endure one all kinds of degradation. I can’t count how many times I wished Solomon would suddenly go-Django on everyone’s ass.

But again, that isn’t the message of this film. In fact, I don’t believe there is a message. Nor should there be. Simply presenting Solomon’s story as he originally wrote it says far more about the ignorance and inherent injustice of slavery than a heavy-handed message shoved in our face by a less-skilled director.

When it was over, I looked over at my wife and said this was one of those movies I‘m glad I watched, but would never need to see again. And we both agreed it’s something probably everyone should watch at least one time. When Lucy asked why, my wife simply replied, “Hopefully, so nothing like this never happens again.”

But alas, I’m reluctant to agree with the Academy. 12 Years a Slave is a good film, an important film. And yeah, I suppose it’s one of those movies everyone should see. Was it the best film of 2013? If historical and social relevance is the sole criteria, then yeah, and those Academy idiots who didn’t bother to watch it are justified. It certainly earned all its nominations (especially Lupita Nyong’o, who deservedly won for Best Supporting Actress), but awarding a Best Picture statue for sheer nobility is wrong-headed. From a pure artistic standpoint, setting aside the subject matter, there were better nominated movies this year.