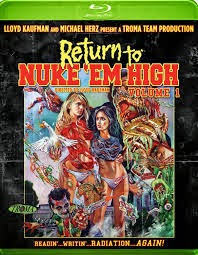 There are cult films, then there are Troma films, which are really there own little genre.

Troma Studios’ heyday was during the 80s and early 90s. They managed to crank out two bonifide cult classics during this time (The Toxic Avenger and Class of Nuke ’Em High) which were symbolic of most of their product…low budget splatstick loaded with gore, gross-out gags, nudity, sex, political-incorrectness, outrageous plots and over-the-top characters. Along the way, Troma became a brand name among fans of this kind of stuff.

But, like hair metal, Members Only jackets and wine coolers, Troma never actually went away, but the popularity of their sleazy brand of cult movie mayhem faded as fans grew up and moved on to other things.

So I suppose Return to Nuke ‘Em High (ominously subtitled “Volume 1”) can be seen as a comeback by Lloyd Kaufman (Troma’s co-founder), who chooses to direct this belated sequel as though nothing has changed, perhaps thinking absence makes the heart grow fonder. Hey, it worked for Meat Loaf, who dropped his bombastic Bat Out of Hell II album a full decade after the rest of the world embraced grunge & rap, and it still sold a gajillion copies. Sometimes, if you wait long enough, the pendulum can swing back your way, making all your old tricks seem new again.

All which brings me to my own personal problem with the film: I was never able to shake the feeling that everyone involved was trying way too hard to be outrageous. Attempts to shock or offend its audience come across as juvenile and pandering. For every scene which manages to be deceptively clever, there are at least three or four which are insultingly stupid (such as the morbidly obese guy who frequently shows up to flash his gelatinous girth for the sake of a cheap laugh).

As stated before, this is subtitled “Volume 1”, which I initially thought was simply a clever joke (poking fun at the current trend of milking a popular franchise for all it’s worth, like Twilight and Harry Potter). But indeed, this truly is only the first half of the film, abruptly ending as a “To be continued” card flashes on the screen. “Volume 2” is supposed to be released later this year, which will conclude the story (such as it is).

Still, as blatantly dumb as it is, Return to Nuke ‘Em High isn’t boring, the absolute worst sin a film can commit. Part of its appeal lies in the conceit that a willingness to go too far is reason-enough for its existence. There’s also a dubious sense of desperation prevalent throughout the film (like a Motley Crue comeback tour) that is sort-of fun to watch. We see lots of the same old gags that might have been shocking two decades ago, but today, they are mainly a comfort to those who might have grown up with this stuff.