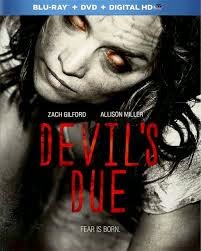 Found footage…movies made in this style are hard for me to view objectively for two reasons. First, what was once a fairly novel idea has been run into the ground (especially in the horror genre). Second, I automatically assume using found footage is more of an economic decision than a creative one.

Not that there haven’t been some good ones. The first Paranormal Activity is suitably creepy, Barry Levinson’s The Bay is timely and disturbing, and Apollo 18 is an underrated gem (though admittedly, I’m in the minority on that one). Because of the nature of those films, found footage was a logical choice, a major part of the stories themselves. But most of the time, it’s a lazy and distracting way to get things done cheaply.

Like so many found-footage films before it, Devil’s Due is a tired reminder that the genre has over-stayed its welcome. It’s essentially Rosemary’s Baby presented through home movies and surveillance cameras. Newlyweds Zack and Samantha return from their honeymoon in the Dominican Republic and learn they are expecting. Of course, there is something wrong with their bun in the oven (if you can’t guess what, then you need to see more horror movies). They are also being watched from the shadows by a group with a keen interest in this child (if you can’t guess who, then it’s obvious you have never seen a single horror movie).

But originality isn’t necessarily a prerequisite for a good story (even the original Halloween wasn’t the first of its kind), as long as you put a unique spin on tried-and-true horror conventions. However, Devil’s Due tells the same old coming-of-the-antichrist tale, complete with all the usual tropes, and its use of found footage displays a total lack of creativity or imagination. Despite decent performances, a couple of impressive scenes and a few well-timed jolts, this is nothing we haven’t seen before.

For a found footage film to be truly effective, there has to be a logical reason for it to be presented that way. Here, the Zack character carries a video camera around 24/7, compelled to film every single moment of his and Samantha’s life. It’s a lazy plot device for scenes which, in reality, nobody would ever feel the need to document. Because of  that, Devil’s Due takes forever to get even remotely interesting. For at least the first 30 minutes, we feel like we’re watching home movies made by relatives who think we’re actually interested in what they did on their vacation. And when the ball finally does get rolling, it takes a unimaginative path we've traveled before.