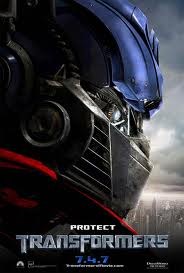 For those of you unfamiliar with the name, Yngwie Malmsteen is a heavy metal guitar virtuoso whose heyday - like most guitar heroes - was during the 80s. He is blindingly-fast, performing solos that would trigger carpal-tunnel syndrome in most people's hands. He obviously knows his way around the instrument, and there isn't a single musician alive who would deny that Malmsteen has more technical skill in one finger than most rock musicians have in their entire body.

However, despite his shredding talent, Malmsteen can't write a decent original song to save his life. They are technically exemplary, but unimaginative and boring once the sheer novelty of speed wears off. Pure technique can take you only so far before the listener wants to hear an occasional song played more from the heart than the appendages.

Yngwie's songs are a lot like Michael Bay's movies, Transformers in particular. And if my analogy makes any sense, you'd know I'm not necessarily bashing Bay. It's fashionable - if not a bit cliche - for movie purists to jump on the "Michael Bay sucks" bandwagon. But Michael Bay doesn't suck. That would imply he is not very good at his job. On the contrary, Bay is a very good filmmaker. He simply hasn't made any good movies yet.
Technically, Bay is as good as any other director of effects-heavy Hollywood blockbusters, but like Malmsteen, he never wants you to forget it. The difference between James Cameron and Michael Bay is the same as, say, Yngwie Malmsteen and Jimi Hendrix. No one can dispute the raw talent of both guitarists, but Hendrix always used his skill to serve the song, not vise versa. They were never mere platforms for skin-shredding pyrotechnics.

Try watching Cameron’s Titanic and Bay’s Pearl Harbor back-to-back. Both movies are huge historical epics, both feature phenomenally photogenic lead actors, both are technically masterful, and both have screenplays that aren’t really very good. From a technical standpoint, Titanic hasn’t aged as well, but is still engaging because Cameron obviously cares about his story & characters, no matter how broadly-drawn they may be. Watching Pearl Harbor, one gets the impression that Bay can't wait to blow shit up.

Transformers is probably the movie Bay had been waiting to make his entire life. Its premise and built-in marketability - warring alien robots, based on a line of toys from the 80s, who’ve decided to settle their differences of Earth - allow his Id to run rampant. He literally pummels the viewer with so much over-the-top action, volume and hyper-kinetic CGI that it ceases to be logistically convincing.

Transformers is like a song containing nothing but speedy guitar solos, and edited nearly as fast as Malmsteen’s fretboard finger-flitting. The movie is almost masturbatory with its technical fireworks, and it’s obvious Bay is the adult version of a budding teenage guitarist who finally learns to shred with the best of them. Hey, that's great, but can you play an actual song? You know, there’s a reason why everyone knows & loves “Louie, Louie,” but very few can even name a single Yngwie Malmsteen song. In the end, it’s how music makes you feel, not how hard it is to perform.

Similar to Malmsteen’s lyrics, everything non-technically related to Transformers seems like an afterthought. Need character exposition? Show more of Megan Fox’s shiny cleavage and have some of the Transformers speak like homies. That’ll amuse the kids.

And it did...big time. The fact that the Transformers franchise (three films, with a fourth on the way) has raked in more cash than the annual gross national products of most third-world countries says more about the audience than it does Michael Bay, who is simply giving us what we obviously asked for. Does that make him the bane of the film industry? Absolutely not. We are getting the movies we deserve. Bay is simply providing them on a grand scale, something he does very well.

But junk food, no matter how you dress it up, is still junk food. As a kid, I loved Dairy Queen corndogs, but my palate has developed a lot since then. The Transformers franchise will probably be fondly remembered by kids who grew up with it, but it is unlikely that they’ll look back and continue to think it's a great film.

Michael Bay has skill to spare, but has so-far chosen to use it for visual chest-thumping. Even his lone-attempt at making a thought-worthy film (The Island) ultimately succumbed to car chases, explosions and ear-bleeding volume.

Yngwie Malmsteen learned how to play the guitar faster than anyone else on the planet, but speed is all he really has to offer. Even among us idol-worshipping rockers back in the 80s, we eventually grew bored with pure speed, which was why Malmsteen's "Icarus Dream Suite, Opus 4" was never as much fun to blast from our car stereos as Twisted Sister's "We're Not Gonna Take It."

Bay has the talent to make a truly great movie. He could be another Spielberg if he were inclined, but has chosen not to. And why would he? As moviegoers, we’ve given him no reason not to keep churning out stuff like Transformers. Like I mentioned before, The Island is the one film he directed that almost transcended its big-boom-bam origins, but people stayed away in droves. The Island is, so far, Bay’s only box-office flop. For a fleeting moment, he tried to make something smarter, but we shot him down.