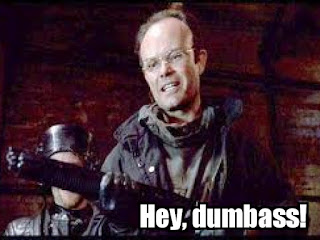 Sure, we love the heroes, but playing the bad guy always looks like a lot more fun. The following is a list of some awesome ones (in no particular order).

1. CLARENCE BODDICKER (Robocop) - For everyone who knows Kurtwood Smith best as the dad on That 70s Show, you should check him out here. He looks more like a college professor than a gang leader, but not only is he cruel, ruthless and violent, he appears to truly enjoy being so.

2. “ANGEL EYES” (The Good, the Bad and the Ugly) - Lee Van Cleef was always a great bad guy, but never badder than he is in this classic. His entrance is still one of my favorite scenes in the movie.

3. CAPTAIN RHODES (Day of the Dead) - Played with wild-eyed fury by Joe Pilato, he’s one vicious mother who deserves a slow, agonizing, nasty-ass death...and gets it.

5. MR. BLUE (The Taking of Pelham One Two Three) - In the original, Mr. Blue (Robert Shaw) is smart, ruthless and virtually unemotional, which is what makes him so cool. Too bad John Travolta goes the opposite direction in the remake, screaming every line like he has Turrets Syndrome.

6. KHAN NOONIEN SINGH (Star Trek II: The Wrath of Khan) - Ricardo Montalban’s greatest role, and the best villain the Star Trek franchise ever had. And yes, that’s his real chest.

7. JOHN KRAMER a.k.a. “JIGSAW” (Saw II; Saw III) - Kramer isn’t really in the first film too much, and it isn’t until Saw II that we understand who he is and what his motives are. What’s cool about Kramer is he doesn’t see himself as a villain. And quite often, neither do we.

8. DARK HELMET (Spaceballs) - All the best moments in Mel Brooks’ last decent movie belong to Rick Moranis, the funniest ones being when he discovers he’s surrounded by assholes, and when he’s playing with his own action figure. According to IMDB, the latter scene was improvised.

9. RAMSES (The Ten Commandments) - Yul Brynner and his chest play foil to Charlton Heston’s Moses. He treats his women badly and Moses even worse.

10. THE JOKER (The Dark Knight) - What more can be said about Heath Ledger’s performance that hasn’t been said a million times? It’s a revelation, considering most of us thought Jack Nicholson would always be the definitive Joker. 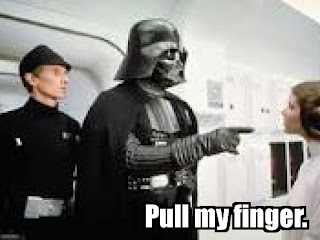 11. DARTH VADER (The Empire Strikes Back) - He was little-more than a powerful henchman in the first movie. Here, he’s the big cheese who has zero-tolerance for failure (just ask his underlings).

12. FRANK (Once Upon a Time in the West) - Not only is it shocking to see Henry Fonda totally nail-it as a ruthless killer, he also guns down children.

14. JACK TORRENCE (The Shining) - As a horror film, The Shining is phenomenally overrated, and I truly believe watching Jack Nicholson going apeshit is the primary reason it remains beloved by so many.

15. MICHAEL CORLEONE (The Godfather, Part II) - Michael wasn’t really a villain in the original, but by Part II, he's become so cold and ruthless that he orders the death of his own brother. Man, that’s just mean. It’s kinda weird that we all root for him, anyway. 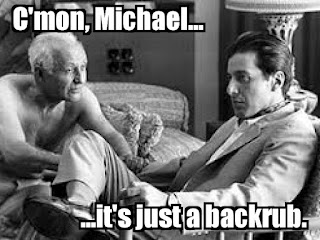 16. HANS LANDA (Inglorious Basterds) - Played by Christoph Waltz, Hans is so outwardly congenial that, even when he turns violent, we still like him. And how can you not love the scenes involving Hans and food?

17. TODD (Hostel, Part II) - A financially successful douchebag, Todd is overly-macho, snorts coke, treats hookers like shit and gung-ho at the idea of paying to torture and kill a complete stranger. At least, until the moment arises, when he tries to back out, turns into a sniveling little weasel and ends up as dog food.

18. HANNIBAL LECTER (The Silence of the Lambs; Hannibal) - Sure, he’s a serial killer. Sure, he’s a cannibal. But we love the guy, especially when he performs his awful deeds on the assholes who have it coming.

19. OTTO WEST (A Fish Called Wanda) - A dumbass who thinks he’s the smartest guy in the room. Kevin Kline won an Oscar for this, and he deserved it.

20. THE T-800 (The Terminator) - It can’t be bargained with, it can’t be reasoned with, and it absolutely will not stop...until you are dead. Couldn’t have said it better myself.
Posted by D.M. Anderson at 5:41 PM