MISERY: An Apology To My Mother-In-Law 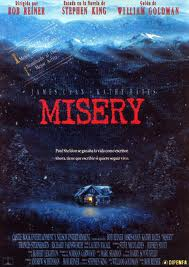 I'm one of the few married guys (that I know, anyway) who actually likes his mother-in-law. We get along pretty well. During the past 24 years I've been married to her daughter, Francie, she's always been gracious, caring and loving. And considering when she met me I was jobless, partied a lot, had no car and dressed like one of the guys from Whitesnake, she was able to overlook my many faults simply because I made her daughter happy. In ensuing years after Francie and I got married, I've done her the same solid by overlooking her tendency to clean our house whenever she visits.

But back in 1987, after being kicked out of college for smoking dope on campus, I was living in a tiny one bedroom apartment by night, looking for a job - any job - by day. During this time, I started dating Francie, probably the hottest girl to ever express interest in me, which even-then struck me as strange, considering she looked and acted like someone who'd gravitate toward college jocks and studs. I was neither, but she later informed me her initial attraction was because I seemed different & dangerous compared to guys she usually dated. She was also under the impression that I was a rebellious rich kid.

Different? Yeah. Dangerous? Hah! Rich? My parents had already had enough of my bullshit and stopped sending me money. A perpetually-stoned loser? Without a doubt. But we got along really great and laughed a lot when we were together.

Although I was able to land a cooking job shortly after being kicked out of school, my income was only enough to pay my rent and buy food. In order to continue dating Francie, I often shoplifted VHS movies and sold them to a pawn shop, continuing the facade that I was rolling in money. But even after that whole ruse fell apart, Francie still loved me.

Anyway, between paying rent and dating Francie, I had very little discretionary income, and spent a lot of my nights reading, my only affordable entertainment (and yes, I shoplifted most of the books I read...there was nothing on Earth easier to steal back then). One of the books I read during those dark times was Stephen King's Misery, the story of a popular romance writer, Paul Sheldon, who is rescued from a violent car crash by Annie Wilkes, a psychotic fan of his novels. She starts nursing him back to health, but upon discovering that he kills her favorite character in his most recent book, she keeps him captive and demands that he brings her back by writing a new novel.

It's a riveting book, one of King's most suspenseful, and I read it all in a single evening. I also made the mistake of telling Francie about it.

Have you ever read a story and, despite the author's description of a character, you picture someone you know in that role? I'd been dating Francie for about a month and had met her mother (Fran) one or two times. For some reason, when I first read Misery, I pictured Fran as Annie Wilkes.

I told Francie about the book and that I pictured her mother as Annie. Francie didn't take offense. In fact, she laughed hysterically after taking my copy and reading it herself, which she then passed to her mom.

As much as I love Francie, one of her true fallacies was not always keeping things to herself. Francie promptly told her mom I envisioned as her Annie Wilkes.

By this time, I was starting to take my relationship with Francie seriously, and couldn't think of a worse bit of info for her to share with her mom, considering I hadn't been leaving the greatest of impressions thus far.

Fortunately for me, Fran has a great sense of humor. After reading the book herself, she jokingly started calling me "Mr. Man" (how Annie addressed Paul Sheldon when she was upset). I don't know if Fran remembers this now, but it was at this time I knew she was an awesome lady.

Like nearly all Stephen King stories, Misery was later adapted into a movie by Rob Reiner. As a huge fan of King, I'm as critical as everyone else regarding movies based on his books, and have to say, along with The Shawshank Redemption and The Mist, Misery is one of the better ones.

In fact, Reiner's version actually improves on the book, most notably during the always-hard-to-watch hobbling scene. In the book, Annie simply chops off Paul's foot. But since bloody gore isn't nearly as effective as showing body parts distorted into impossible angles, watching Wilkes hammer both ankles into submission remains one of the all-time nastiest moments in movie history.

Still, because of the baggage I carried from the original story, it was difficult to separate Annie Wilkes from my mother-in-law. Sure, Kathy Bates nailed it and totally deserved her Oscar for the role. But for me, based on what I was thinking as I read the original novel, Fran was Annie. As far as I know, Fran was never an actor, not even in high school theater. Too bad, because she would have been as awesome as Anthony Perkins playing Norman Bates.

Today, the rest of the world cannot picture anyone else besides Kathy Bates in this iconic role, and I’m probably the only one who once thought his mother-in-law would have been better.
Posted by D.M. Anderson at 5:37 PM