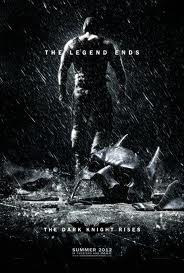 Isn't it weird how Italian food always tastes better the second day? For me, it's the same with The Dark Knight Rises...

At first, the best part about finally getting to see TDKR was I could safely go anywhere on online and not worry about some idiotic troll giving everything away. That's the bad thing about the internet. For those of us who love movies so much that they want to know nothing about a film until they see it for themselves, the internet is a minefield. Even before TDKR was officially released, there were people, some masquerading as critics, some just wanting to show off they were the first to see it (like anyone is really impressed) lobbing spoilers like grenades. Hell, even David Letterman revealed a huge plot twist on his show.

It didn't used to be like this. For the most part, the only time movie surprises were ever ruined was if you personally knew some babbling douche hell-bent on giving away the ending. Even most critics had enough class to simply summarize the basics of the plot and provide their opinions.
I absolutely loved Batman Begins and The Dark Knight. I'm actually not a big fan of comic book movies (and I've never read a superhero comic in my entire life), but these two transcended their comic origins and are simply great films. So I'd been looking more forward to The Dark Knight Rises than any movie in the past decade or so. At the same time, I tried real hard not to set my expectations too high, a hard lesson learned when The Matrix Revolutions turned out to be such a pooch. I don't know what it is about third chapters in franchises; either they end up being complete letdowns (Godfather III, Alien 3, Spiderman 3, Superman III) or they turn out to be surprisingly great (Indiana Jones and the Last Crusade, Back to the Future Part III, The Bourne Ultimatum). There is seldom any middle ground.

Anyway, aside from trying not to get my hopes up, as the release date for TDKR approached, since I wasn't planning on seeing on opening night, I went out of my way to avoid Twitter, Facebook, internet movie sights, and any film review other than Roger Ebert's (not that he'd sway my decision whether or not to see it, but he's one of the few critics left who respects his readers enough to never provide spoilers). I wanted to go into this movie as cold as possible.

So did my oldest daughter, Natalie.

She's 17 now, and although she isn't quite the movie geek that I've always been, this is a series she loves on a level that I remember feeling about Jaws, Star Wars, Escape from New York and Pulp Fiction. And Natalie absolutely loved the previous two Batman films, especially Cillian Murphy, who plays the villain, Scarecrow, and appears in all three of them. Christian Bale and Tom Hardy make her heart flutter as well. As a father who still sees his teenage daughter as a little girl, it's a bit strange watching films with her and learning who she thinks is hot. To those of you whose kids aren't yet teenagers, just wait. Nothing will made you feel older.

Natalie was a tad miffed after I informed her we would not be attending the midnight premiere. But I’m in my late-40s...staying awake until 3:00 AM just ain’t in the cards anymore. I once agreed to drop her off with her BFF to catch the final Harry Potter movie at midnight, briefly forgetting I’d be the one picking them up three hours later. Never again.

Both of us had taken every online precaution to avoid seeing or reading anything threatening to spoil the potential surprises TDKR had in-store for us. Hell, we didn't even bother buying popcorn on our way in. We were on a mission.

There are a lot of things I hate about going to the movies today (cell-phone turds, chatterboxes, nine bucks for two sodas, inflated 3-D prices, 20 minutes of trailers, etc.). But one thing that's really cool is how Hollywood instills the general public with the incessant need to see a movie on the first day, as though it will somehow expire by the second or third. (and with the internet, maybe that's partially true). Anyway, because of this, me & Natalie strolled up to the box office at noon on Saturday, got our tickets and had the pick of every single seat in the theater.

I know it's important for some people to be the first to see a particular movie, and that's fine with me. I wish even more felt the same need, because while you stay up waaaay past your bedtime, grab the last available seat in the front row and uncomfortably crane your head in one direction for 2-3 hours, I can simply stroll into the same theater the next afternoon five minutes before showtime, pay the exact same price and enjoy the exact same movie, with the added luxury of perching my feet on the empty seat in front of me.

As for the movie itself, the big question was whether or not it fulfilled my expectations. If someone were to ask me that question when I first emerged from the theater, I would have said no.

The Dark Knight Rises is really, really long, and for the first half, we see far more of Bruce Wayne than Batman. It's actually pretty slow at first and takes a long time to get going. We are also introduced to so many subplots & characters (including arch-nemesis Bane and femme-fatale Catwoman), that the movie almost threatens to collapse under its own weight. And Bane's voice sounds like a combination of Darth Vader and Sean Connery (which I found monumentally distracting). This thankless role was given to Tom Hardy, and he isn't as strong a villain as Heath Ledger's Joker. This isn't a slam against Hardy, either; he did the best he could with the limitations of the role, and face it...nobody is going to top Ledger's performance in a superhero film for a long, long time. Maybe never.

Overall, my first impression was that TDKR was an anticlimactic conclusion to what could have been greatest trilogy ever made.

Yet, after the movie is over and I thought about it a bit - me and Natalie gabbed on and on about it during the whole drive home - there is a lot to love. The action is first-rate and all of the performances are terrific. I have to admit I was one of those folks dubious hearing Catwoman was a major character, but she turned out to be one of the best parts of the movie (Anne Hathaway was terrific), and at no time is she ever referred to as 'Catwoman.' Then there's Joseph Gordon-Levitt as a dedicated cop, whose character ends up being far more relevant to the overall story (and Batman history) than we're initially led to believe.

The story itself (unpredictable and loaded with twists & revelations) makes this the third film of a true trilogy, not just another sequel. Some scenes, even small ones, will likely seem meaningless if you haven't seen the first two films, and TDKR does not stop to bring the viewer up-to-speed. Finally, the Batman saga (Nolan's version, anyway) is brought to an emotional and satisfying end (if somewhat ambigious), making it impossible for the franchise to continue.

No, what I just wrote is not a spoiler, so shut up.

As I write this, I like The Dark Knight Rises more now than I did when I left the theater. The more I think about it, the more impressive it becomes. Kind of like when my wife makes Italian food; it's tasty enough at dinner time, but somehow is even yummier the next day, after the ingredients have more time to mix in together. The whole experience reminds me of Fight Club. I hated that movie the first time I watched it, but damn if didn't stop thinking about it long afterwards. Over the years, it has become one of my favorite movies.

I still think the second film is the best one overall, but also believe Christopher Nolan made the best third chapter possible.

As for Natalie? This trilogy is her Star Wars. She loved every bit of The Dark Knight Rises and is already clamoring to go see it again (sorry, not at ten bucks-a-pop, kid). I remember thinking the same way after Return of the Jedi...that I'd just witnessed the end of the greatest saga ever told; ecstatic that it was so great, yet a bit sad that it was all over.