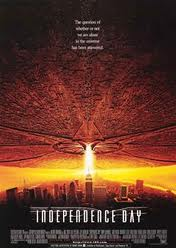 2. When someone informs you she is a dancer, it is natural to assume she means ballet.

3. Even though they traveled "90 billion miles to get all rowdy,"  aliens will still rely on our clunky little statellites to wage their attack.

4. Jet fighters can bank on a fucking dime. Well, at least Will Smith can. Harry Connick, Jr...not so lucky.

5. Even though these creatures are wearing protective bio-mechanical suits, it is possible to knock them unconscious with a single punch without breaking every bone in your hand.

6. The United States is a much smaller country than we were taught in school, because even though most of these characters are separated by thousands of miles, they are all able to converge at one strategic spot within just a few hours.

8. Roland Emmerich and Dean Devlin must have watched the original V television series when they were younger. (see below)

9. It is possible for a human being (Will Smith, at least) to expertly fly an alien fighter simply because he's “seen these things in action” one time (I guess that means Smith can race in the next Daytona 500 if he wants).

10. The rest of the world will wait around helplessly for Americans come up with a plan to defeat the invaders, because America knows how to handle this shit.

11. Along with Air Force One, this is the kind of movie that Bill O’Reilly probably masturbates to.

12. An alien race, which has mastered interstellar travel and developed technology to commit worldwide genocide, but apparently has never heard of virus protection software, can be rendered defenseless by a single nerd with a laptop...

13. ...said-laptop is an Apple computer, which is so versatile you can plug it right into the dashboard of an alien ship.

14. It is impossible to set timers on nuclear weapons past thirty seconds...

15. ...but that’s okay, because thirty seconds takes a hell of a lot longer to elapse in outer space than it does on Earth.

16. You can destroy every major city on Earth, wipe out 90% of the military and kill millions of people, but still have a happy ending.

17. You can make a huge, dumb, audience-rousing blockbuster that isn't mostly CGI.

20. Not every blockbuster needs to be a franchise. Of the 50 top grossing movies of all time, Independence Day is one of only nine movies which didn’t launch a franchise or isn’t a sequel itself * (the others are Titanic **, The Passion of the Christ, Tim Burton’s Alice in Wonderland, Finding Nemo, Forrest Gump ***, The Sixth Sense, Up and E.T. ***).

* However, Dean & Emmerich have recently been threatening to make, not one, but two sequels, shot back-to-back.
** Titanic II, by mockbuster kings, The Asylum, doesn’t count.
*** A sequel was planned at one time, but later abandoned. 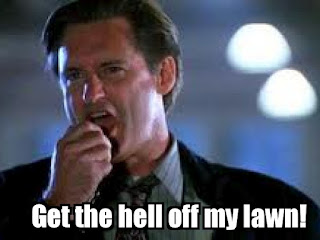