NIGHT OF THE LEPUS: James Cameron, Eat Your Heart Out 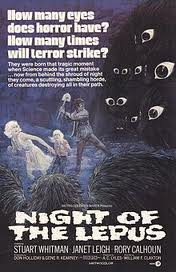 I wrote my first novel a long time ago, and although it's a sleazy piece of junk (called Bunnies from Hell), and remains mercifully unpublished (it's pretty terrible), it was a proud moment in my life. After years of talking about writing a novel, I finally wrote one. It's a raunchy satire, in which I tried to find the most ridiculous animal crawling the globe with which to write humorous horror tale. Little did I know that someone beat me to the punch...25 years earlier. Only they were serious.

As a fan of animals-gone-bad movies, I’ve sat through a lot of junk about killer ants, bees, frogs, cats, dogs, worms, slugs, rats, etc. For every great movie like Jaws, there are dozens of low-budget knock-offs. But if you can’t appreciate good trash, there’s no point watching movies.

And I thought I’d seen it all until  Night of the Lepus.

Night of the Lepus is one of the all-time great bad movies, the kind of endearingly stupid flick that makes you wish Mystery Science Theater 3000 was still around. Unless you think such tripe is beneath you (how sad for you), this is a hard movie not to like. In case you don’t know, ‘lepus’ is another word for rabbit. That’s right. This movie is about killer rabbits. I’ll pause for a moment while you ponder the concept.
I’ll repeat that. The movie is about killer rabbits, the least terrifying animal on Earth (except maybe for otters). That doesn’t stop director William Claxton from doing whatever he can to try and make them scary. He fails, of course, which is precisely what makes this movie so great. Night of the Lepus, made in 1972, is a no-budget hoot in which rabbits, breeding so fast they are destroying crops in the Arizona desert, are injected with a hormone intended to disrupt their breeding cycle. Instead, it turns them into cow-sized maneaters that kill everything and everyone in their path.

While the story is your basic nature-run-amok plot, what makes the movie worth seeing are the numerous (and oft-repeated) scenes of herds of little bunnies running (in slow motion) through miniature city streets, farmhouses and river beds, accompanied by cattle stampede sound effects. Occasionally, we get close-ups of vicious hares, blood dripping from their whiskers, chomping on their victims. What shoves Night of the Lepus into classic territory is its deadly-serious tone, as though there’s any possible way rabbits, no matter how large, would ever be considered terrifying. Rabbits could be fifty-feet tall, venomous, carnivorous and able to shoot lightning bolts out their asses and we'd still want to cuddle them.

Adding to the hilarity is a cast of once-famous actors earning their paychecks by reacting to the mayhem, including Janet Leigh, which is kind of pathetic. In 12 short years, she’s gone from being the most famous slasher victim of all time in Psycho to igniting fuzzy puppets with a road flare. And fans of the original Star Trek will be overjoyed to learn DeForest Kelly (Dr. McCoy), didn’t remain completely unemployed after the show was cancelled. Here, he looks like an aging 70's era swinger, complete with scarf, polyester bell-bottoms and a porn-star mustache.

Aside from the incredible special effects, there is even more incredible dialogue. I don’t think even Christopher Walken could have ominously shouted, "A herd of killer rabbits is heading this way" and have it incite any terror at all. In that respect, the whole cast must be commended; lesser actors wouldn't be able to get through their scenes without bursting into laughter.

Add a title theme that sounds like discarded James Bond music, and you’ve got a movie so awesomely bad that it actually manages to be more entertaining than most modern big-budget epics.

Night of the Lepus is a must-see. And as ridiculous as it is, the movie is fast-paced and quite bloody for a PG-rated film. To quote an often-used cliche, they just don’t make movies like this anymore. Being relatively obscure, it may not be waiting on the shelf of your local Best Buy, but it has popped up late at night on TCM on occasion. Trust me, it's worth checking out.

My first novel, Bunnies from Hell, remains tucked safely from the world in my desk drawer, where it will stay. The book was intended to be funny, but for sheer belly laughs, it simply cannot compete with a movie like this. Night of the Lepus is more hilarious than all the Twilight movies combined.
Posted by D.M. Anderson at 2:59 PM