JASON X and the Solitary Man 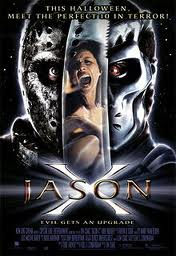 This was the last movie I ever went to a theater to see by myself.

One weekend when my mother-in-law came to visit, my wife suggested taking her to the Saturday Market in downtown Portland. I must have had a look on my face like I'd just caught a whiff of someone else's fart, because she simply sighed and said I could stay home.

"You sure, honey?" I asked with mock-concern, doing the Snoopy dance in my head.

"Yeah, just make sure to go to the store and pick up stuff to barbecue later," she replied. Then off they went, Francie, her mom and our daughter, Natalie.

I have nothing against the Saturday Market, so long as I'm not there. Row upon row of homemade preserves, breads & sauces, tie-dye t-shirts, blown glass, hemp clothing, hippie jewelry and art made from boat propellers, all sold by folks who look like they really enjoyed the 60s. There's also a lot of would-be artists, breakdancers and street musicians. Of those, the only one who ever impressed me was this scraggly, pot-bellied Elvis impersonator with thick glasses, who looked like he'd lived his entire life as a mountain man. His toy guitar didn't even have strings, but he knew all of The King's moves as he croaked out "Heartbreak Hotel." The guy may have lacked any discernable talent, but at least he was different. Hence, his guitar case was the only one I tossed my change into.

As a teacher, husband and father, having an afternoon to myself was a rare occasion indeed, so I decided to make the most of it and do something I hadn't done in ages...take in a movie all by myself.

When I was a kid, I used to go to movies alone all the time. On their way to afternoon Portland Buckaroos hockey games (the Buckaroos were a minor league franchise), Mom & Dad would drop me off at the Southgate. I enjoyed those times, sitting in the dark, nothing but me and the screen. Sometimes I got to bring a friend, or was forced to bring my sister, but if it was a movie I was really dying to see, I preferred going alone. I guess that might be considered a little weird, but I didn't know that at the time.

I don't know why going to the movies has always been considered a social activity. Sure, I understand the whole dating thing, but other than that, why does almost everyone on Earth feel the need to have a companion at the movies? Unless you are a total douchebag, it isn't like you're gonna be shooting the breeze once the lights go down. And unless you are on a date, you aren't likely to give a single thought to the person next to you until the movie's over.

The next time you go to a movie, take a look around the theater. Chances are good you won't see anyone sitting all by themselves. None of us have a problem watching TV or a rented movie alone, so what is it about being in a theater that makes nearly all of us feel the need for company? And really, isn't going alone a hell of a lot cheaper?

Still, once I hit my teens, I pretty much stopped going to movies alone as well, and wouldn't fly solo again until 2002. Today, I am often able to talk my my wife into tagging along for something I want to see, but still, there have been dozens of films over the years I passed on during their theatrical runs, simply because I couldn't convince anyone to go with me.

For my family-free afternoon, I chose Jason X, the tenth movie in the never-ending Friday the 13th franchise. Aside from some pretty spectacular death scenes, I never thought there was anything that great about the series (even though I have seen them all). They are derivative, poorly-acted, badly-directed and generally pretty stupid. But I decided on Jason X for two reasons...1) I was in the mood for mindless violence, and 2) The premise of this one is so outrageous that a guilty good time seemed guaranteed.

In case you just arrived here on Earth, Friday the 13th was an enormously popular series of slasher films featuring Jason Voorhees*, an unkillable, hockey-masked psycho who stalks the woods in and around Camp Crystal Lake (save for his short Manhattan vacation in Part 8), slaughtering any teenager he stumbles across. He ‘dies’ at the end of almost all of them, but you can’t keep a good psycho down (not when there's cash to be made), so in ensuing films, Jason has been repeatedly - often ridiculously - resurrected.
This ridiculousness reaches its nadir in Jason X, arguably the most bizarre left-turn of any film franchise I can think of. In this one, Jason ends up cryogenically frozen, only to be accidentally awakened onboard an orbiting space station 400 years later, where his killing spree continues unabated. That’s right...it's the slasher movie equivalent of Abbott & Costello Go to Mars.

Whether or not you are a fan of the series, you have to admire, not only the audacity, but the sense of humor of those responsible for this film. I would have given anything to be a fly on the wall at the story meetings, where the writers must have finally thrown up their hands and said “Fuck it. Let’s launch him into space.”

Nearly everyone dies horribly, and sometimes more creatively than any previous Friday the 13th movie. The best death scene is easily the one where a young woman’s face is smashed apart on a countertop after Jason dips her head in a sinkful of liquid nitrogen (no, it is never explained why a laboratory would need a sink filled with this shit).

Obviously, we ain’t talking Henry V here, but I knew that when buying my ticket, grabbing a soda and nestling into a seat near the back of the theater, keeping my distance from the few packs of babbling teenagers who also showed up. Of course, I was the only person all by himself, not-to-mention the oldest guy in the room. While I tried not to let that bother me, I briefly thought maybe I should have paid to see something with appeal to a normal 40-year-old.

Despite my advanced years, I have to admit I enjoyed the movie for all the reasons I’d mentioned before, even though the gaggle of teenage girls several rows ahead wouldn’t shut the fuck up, gabbing amongst each other like...well, teenage girls. At one time, I actually shouted at them to shut up because I couldn’t hear what the actors were saying. One of them shot back the same expression I gave when my wife suggested going to the Saturday Market. I suddenly felt like an idiot, realizing I just chastized a group of kids because I couldn't hear the dialogue in a Jason movie. While I cannot stand people who feel the incessant need to talk back at the screen, it wasn’t like this was The Usual Suspects.

These girls knew exactly what they were paying to see, exactly what would make the movie fun, probably more than I did. In fact, I’d wager they knew nothing of Jason’s history to begin with, and if I were pretentious enough to tell them, they still wouldn’t give a shit. Some movies are truly meant to be watched as a mob, and if there was ever a franchise less worth defending for its dramatic qualities than Friday the 13th, I’ve never seen it.

So once I got over myself, I had a pretty good time. Yes, Jason X is a shitty movie, but at least it knows its a shitty movie and no attempt is made to convince the viewer otherwise. This actually makes it a lot more fun than the previous nine Friday the 13th films. When you think about it, the movie may be even more self-aware than the Scream series, which most critics and audiences would agree is far better. But Jason X’s uninhibited outrageousness sets it apart. Sure, it’s still a badly-acted, clumsily-scripted slasher movie, but at the same time, you can’t help-but-think everyone involved in its production knew so from the get-go.

By the way...after the movie, I forgot to stop by the store to get stuff for our barbecue.

* Jason wasn’t actually the killer in the first film. It was his mother. Nor was he present in the fifth one.
Posted by D.M. Anderson at 5:30 PM