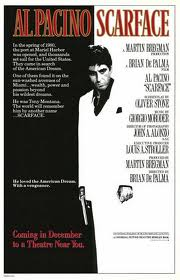 
1. You can make an entire movie about the Cuban criminal underworld with only one actual Cuban in the cast (Steven Bauer).

3. Cranking up the volume on a tiny hotel TV will effectively mask the noise made by a roaring chainsaw.
4. Nothing dates a movie from the 1980s quite like a synthesized, pop music score.

5. Miami has relatively few police patrolmen, allowing you to wage massive gunfights on the streets, in a nightclub or a high-end residential neighborhood whenever you need to.

6. Unlike The Godfather, which needed two movies and six hours to chronicle a gangster's rise to power, one can easily go from hired thug to criminal kingpin during a single five-minute musical montage. 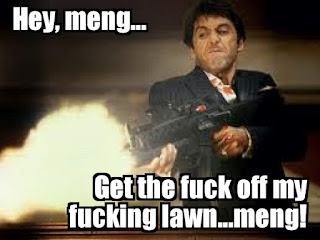 7. All these current would-be gangstas who think Tony Montana is so cool should dress more like him, because even a wide-collared leisure suit looks less ridiculous than belting your pants under your ass cheeks.

8. Law & Order: SVU star Richard Belzer was once a stand-up comic, though not a very good one.

10. If all he has is his balls and his word, then Tony Montana needs to protect his balls better, because throughout the movie he breaks his word to damn-near everybody.
Posted by D.M. Anderson at 2:20 PM