A Familiar Ring to KILLER WEEKEND 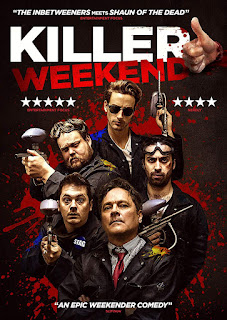 Killer Weekend is a British horror-comedy that aims for a vibe similar to Shaun of the Dead. Sometimes it succeeds, but a lot of it feels awfully familiar.

A crew of self-absorbed douchebags go to a zombie survival camp for a bachelor party weekend, which takes a turn for the worst when one of them accidentally kills one of the “undead.” This leads to an unfortunate chain of events where they end up inadvertently killing a few others. The guys who operate the camp are all ex-soldiers and understandably pissed, vowing revenge. This leads to a bloody stand-off in an old nuclear bunker.

Everything’s played for laughs and it’s often fairly amusing, though seldom laugh-out-loud funny, mainly because we’ve seen a lot of these tropes before, mostly regarding the ensemble cast of goofy characters. Everyone’s painted and performed in broad strokes, much of the humor mined from their casual – almost cavalier – attitude toward the death and gory violence they’re causing, then later subjected to. The soldiers, of course, are even more cartoonish than the so-called protagonists.

But unlike Shaun of the Dead or Tucker and Dale vs. Evil, none of the characters are remotely likable. In fact, the protagonists are the actual bad guys here. Furthermore, some of their personalities change drastically depending on the scenario. For example, one family man, Toby (David Mumeni) is supposedly the group’s moral compass and initially horrified by what they’ve done. Then without warning, he’s as indifferent to the carnage as the rest of them...all for the sake of a one-liner or two.

Still, Killer Weekend has enough moments to make it worth checking out. The situation itself is sort-of engaging and a few of these characters – such as Eric (Danny Kirrane), who takes the zombie weekend a little too seriously – are genuinely funny. Just don’t expect much beyond that.