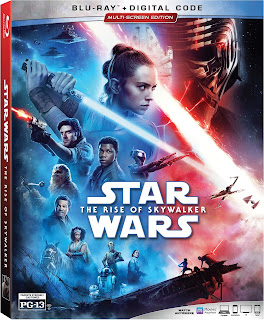 STAR WARS: THE RISE OF SKYWALKER on Digital 3/17 and 4K, Blu-ray and DVD 3/31
Star Wars: The Rise of Skywalker, Lucasfilm and director J.J. Abrams’ riveting, inspiring conclusion of the seminal Skywalker saga, electrified audiences around the globe, earning more than a billion dollars worldwide. Bonus material includes a feature-length, making-of documentary, which goes behind the scenes with the cast and filmmakers from Star Wars: The Rise of Skywalker and explores the legacy of the Skywalker saga. Bonus features also dig into the film’s Pasaana desert scenes, including the thrilling landspeeder chase, and the ship in which Rey discovers family secrets as well as a new little droid named D-O. Plus, fans will hear from Warwick Davis, who reprises his role as Wicket the Ewok, as well as the creature effects team that created a record 584 creatures and droids for the film. Digital consumers will receive an exclusive feature highlighting legendary composer John Williams, who has scored every episode in the Skywalker saga.

JUMANJI: THE NEXT LEVEL on Digital 3/3 and 4K Ultra HD, Blu-ray & DVD 3/17
JUMANJI: THE NEXT LEVEL catches up with Spencer (Alex Wolff), Fridge (Ser'Darius Blain), Martha (Morgan Turner) and Bethany (Madison Iseman) three years after their first adventure in Jumanji’s mystical video game world. As they return to Jumanji, they discover that nothing is as they expect. With more action and surprises, the players will have to brave parts unknown and unexplored, from the arid deserts to the snowy mountains, in order to escape.
The bonus materials include a gag reel, several behind-the-scenes featurettes, in-depth scene breakdowns, a brand new jingle and more! The 4K Ultra HD, Blu-ray and DVD also include a fully interactive collectible map that employs Augmented Reality to bring Jumanji to life via smart phone. The experience provides up to ten minutes of game play and allows users to create their own 8-bit Avatar, navigate a series of mini games and much more! 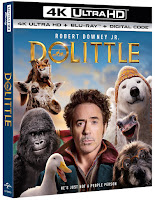 DOLITTLE on Digital 3/24 and on 4K Ultra HD, Blu-ray, DVD and On Demand on 4/7
Robert Downey Jr. electrifies as the man who could talk to animals: DOLITTLE. After losing his wife, he hermits himself away behind the high wall of his manor but is forced to set sail on an epic adventure when the queen falls gravely ill. Helping Dolittle in search of a rare cure are his rambunctious animal friends—including Chee-Chee (Malek), an anxious, self-conscious gorilla; Dab-Dab (Octavia Spencer, The Help), an enthusiastic but bird-brained duck; the bickering duo of cynical, neurotic ostrich Plimpton (Kumail Nanjiani, The Big Sick, “Silicon Valley”) and chilly-but-chill polar bear Yoshi (Cena); as well as a headstrong parrot named Polynesia (Thompson). Catch incredible bonus content that you can only see on the 4K Ultra HD, Blu-ray, DVD, and Digital release showcasing the making of the film and insight to all the cast. 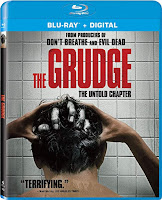 THE GRUDGE on Digital 3/10 and on Blu-ray & DVD 3/24
A curse born in Japan is simultaneously unleashed in the U.S. Those who encounter it are consumed by its fury and met with a violent fate. Producer Sam Raimi brings us the untold chapter of this horror classic starring Andrea Riseborough, Demián Bichir, John Cho and Betty Gilpin, with horror movie legend Lin Shaye (Insidious, Ouija) and Jacki Weaver, in the darkest, creepiest and most shocking film in the series. Filled with terrifying bonus content including three featurettes, an alternate ending and bonus scenes.
Posted by D.M. Anderson at 10:22 AM