TWO ON A GUILLOTINE is "Cannon" Fodder 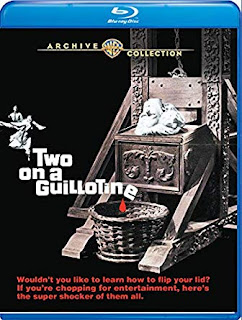 Those of a certain age might recall William Conrad as the original Marshall Dillon back when Gunsmoke was a radio drama. If you’re like me, he was Detective Frank Cannon, while the following generation probably remembers him as the D.A. in Jake and the Fatman. But I’ll bet few of us were aware he was also a prolific director.

Conrad mostly worked behind the camera on television, but helmed a few low-budget thrillers in the ‘60s, such as Two on a Guillotine. Relatively obscure, the film won’t make anyone forget Alfred Hitchcock – or even William Castle – but it has its moments.

The best ones are provided by Cesar Romero, who isn’t in the film nearly enough. Hamming it up as John Harley Duquesne, he’s a famous magician who accidentally beheads wife Melinda (Connie Stevens) during a guillotine trick. He dies 20 years later, but not before vowing to return. Following the mother of all open casket funerals, estranged daughter Cassie (also Stevens) inherits everything on the condition that she can stay full week in Dad’s creepy old mansion.

Echoing House on Haunted Hill, the place is loaded with a variety of terrors that frequently pop up in an apparent effort to scare her away. Slimy reporter Val Henderson (Dean Jones) insinuates himself on Cassie under the guise of a real estate agent, offering to investigate who’s behind it while – of course – falling in love with her.

We spend a lot more time watching Cassie succumb to Val’s charm and bad jokes than we really need to, especially a prolonged nightclub scene where they gaze intensely into each other’s eyes. Personally, I’ve never been able to take Connie Stevens seriously and perhaps my formative childhood years keep me from accepting Jones as anything but a gosh-darn Disney dad (I’m still trying to recover from his Mengelesque turn in Beethoven). But Romero comes to the rescue late in the story to bring things to an entertaining conclusion.

Two on a Guillotine isn’t all that original or particularly memorable and William Conrad more-or-less hung up his director’s hat soon after. Still, for an economically made little potboiler, the film sorta works if expectations are kept in-check (not that they’d be all that high to begin with). One could also pair it up with Three on a Meathook for a daffy double feature.