The Morons of MIND GAMES 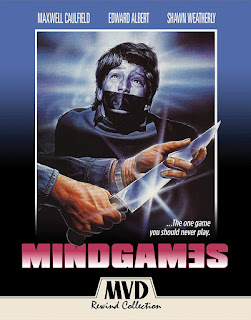 Half-way through the film, my 15-year-old daughter came into the room, took a look at the screen, heard about 20 seconds of the soundtrack and said, “This is from the ‘80s, isn’t it?”

Indeed it is, kid...a goofy relic from a goofy decade, Mind Games is aesthetically-typical of the low-budget psychological thrillers that once glutted video store shelves. In this one, the world’s dumbest family decides to take a road trip in a motor home.

How dumb? Consider this…

10-year-old Kevin Lund wanders into the woods and meets drifter Eric (Maxwell Caufield), sitting alone on a rock, shirtless while playing his flute. With a way-too-cheerful grin, Eric invites the boy over, promising to show him how to play. Rather than run the other way screaming “Stranger danger,” Kevin brings him back to meet the folks.

Eric says he’s is a psychology major, though it’s immediately clear that only the psycho portion is accurate. Most of what flies from his mouth would prompt you to find another seat on the bus. Miserable mom, Rita (Shawn Weatherly) is suitably creeped out, but dimwit dad Dana (Edward Albert) is charmed enough let Eric tag along.

The very next night, Eric suggests he and Kevin sleep in the woods alone. Dana and Rita allow it (!), then argue whether or not that was a good idea. Meanwhile, Eric takes Kevin to vandalize a house and kill the owner’s dog. Kevin’s initially horrified, but shortly after, the two are playing poker together because Eric’s too awesome to allow such trifles as animal cruelty end a great friendship.

Eric keeps chiding Rita about her lousy marriage. She’s alarmed by his increasingly unnerving behavior and insists they leave him behind. Then she has sex with Eric (!), who later suggests murdering Dana to get him out of the way. Though she briefly considers it, Rita changes her mind, but not before Eric tries to off Dana himself. And even when it finally occurs to the entire Lund family that Eric’s dangerous, they still don't go to the police. In fact, after assuming they’ve finally ditched him, they continue the vacation, giving little Kevin permission to explore an abandoned mine shaft...alone...at night.

I dunno...maybe they hate the little urchin as much as they hate each other.

For a film called Mind Games, we don’t witness a hell of a lot of brainpower. The plot is driven entirely by the jawdropping stupidity of its main characters. While Caufield is actually pretty good – and probably had fun doing this – at-no-time does Eric say or do anything that suggests he’s charming and calculating enough to manipulate anyone but the most gullible rube. Which explains the Lund family, I guess. Dana & Rita’s idiocy - to say nothing of piss-poor parenting skills - give the film a level of campiness that sort-of raises Mind Games above the usual straight-to-video thriller. Viewed in that context, there’s some fun to be had at its expense.

As my daughter perceptively pointed out, the entertainment value of Mind Games stems from being a silly product of its era, making it another fitting addition to the MVD Rewind Collection. Like others in the series, the disc comes with more comprehensive bonus features than movies like this generally warrant, but we’re grateful to have anyway.

EXTRA KIBBLES
"MAKING OF MIND GAMES” - A informative and entertaining retrospective doc that’s actually longer than the movie itself. Featuring interviews with director Bob Yuri, producer Mary Apick and the entire surviving cast (Edward Albert passed away 2006), this tells a compelling story of its own.
"BOB YURI: PORTRAIT OF A PRODUCER” - Yuri went on to greater success as a producer of such creatively-budgeted fare as Crash and The Illusionist. Accompanied by dozens of film clips, he enthusiastically discusses his entire career.
TRAILER
MINI POSTER
REVERSIBLE COVER
KITTY CONSENSUS: