THE HUNT FOR RED OCTOBER (Steelbook): Everything Old is New Again 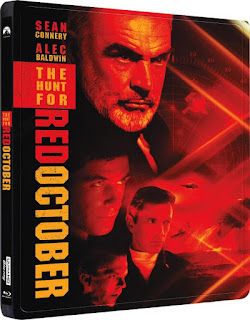 Back in the good ol’ days of the Cold War, a novelist or screenwriter writer didn’t have to break much of a sweat creating a formidable villain. Give ‘em a Russian name and 30 years of conditioned paranoia took care of the rest. Such baggage may have rendered our weekend weather forecasts "sunny-with-a-chance-of-ICBMs," but it was great thriller fodder. With Soviets as bad guys, the stakes were always higher, the implications more ominous.

The late Tom Clancy knew that. His meticulously-researched novel, The Hunt for Red October, reads more like a submarine instruction manual than a Cold War potboiler, with so much technical jargon that there was no room for any real characterization. Luckily for him, Russian antagonists required no exposition and he milked our cultural anxiety for all it was worth in several novels. Whatever those red bastards were up to, surely it was nefarious.

It must have galled Clancy to-no-end when the Cold War ended and we had the audacity to become BFFs with those same Russians.

Hence, 1990’s The Hunt for Red October ended up being the best Cold War film not actually made during the Cold War. By tacking on a prologue which establishes the setting as 1984, what was once patriotic pulp suddenly becomes a period piece. And that’s probably for the best. Had it actually been made back in ‘84 with someone like John Milius at the helm, there’s a strong chance Red October would have been a gung-ho, right-wing slab of Proud-to-be-an-American propaganda.

Instead, John McTiernan – fresh off Predator & Die Hard - directs a sharp, witty screenplay that streamlines Clancy’s heavy-handed technospeak into an efficient Cliff’s Notes version of submarine warfare while making his ensemble of characters more interesting (even the minor ones). The film’s ace-in-the-hole, of course, is Sean Connery. Perhaps because his late career resurgence at the time generated a considerable amount of audience goodwill, we automatically respect his authority as Marko Ramius, a renegade naval Captain who steals Russia’s newest sub, a first-strike weapon which can run completely silent. Elsewhere, Alec Baldwin remains the best Jack Ryan, Clancy’s reluctant CIA bookworm who’s in over his head as he tries to convince his superiors that Ramius is trying to defect to the U.S.

Sure, the Russians are antagonists by default, but aren’t depicted as the dreaded Red Menace. They simply want their boat back, yet are willing to sink her to keep her out of American hands (we’d probably do the same if things were reversed). Still, the conflict escalates into a suspenseful high-stakes game of cat & mouse in the Atlantic. Best of all, the entire scenario seems completely plausible and we almost never question the story’s credibility. In fact, I first saw the film with a buddy who used to serve on a Navy sub and he was very impressed by its overall authenticity. Clancy may have done all the homework, but the movie made that homework exciting.

A lot has changed in the 30 years since The Hunt for Red October was released. Historically speaking, the American-Russian honeymoon was pretty short and, present company in the White House notwithstanding, most of us are currently as distrustful of the Russians as any time during the Cold War. We may no longer live in constant fear of nuclear brinkmanship, but those sons-of-bitches have a lot of nerve hacking our Facebook accounts. It’s with no small sense of irony when I suggest our collective paranoia might make The Hunt for Red October more timely than ever.

Ultimately, everything old is new again, a term which could apply to this 30th Anniversary Edition. Not only has the film itself aged well – both thematically and aesthetically – this 4K transfer is a considerable improvement over previous editions. There aren’t any new bonus features, but what’s carried over is good and it’s all nicely packaged in one of the cooler Steelbooks I’ve seen lately.

MEE-OW! LIKE TAUNTING A MOUSE TO DEATH.
Posted by D.M. Anderson at 4:36 PM