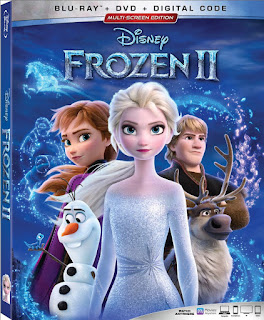 Personally, I’d have preferred Disney to do a sequel to Zootopia, which is conceptually more conducive to franchising. However, Frozen was the big cultural juggernaut, so I guess we shouldn't be surprised they chose to follow-up that one.

At the very least, you’ve seen far worse animated sequels. At no time does Frozen II reek of an attempt to sell merchandise, nor is it cynically churned out to separate beleaguered parents and non-discriminating kids from their hard-earned family-night-out money. The same directors, cast, composers and animators from the first film obviously put the same amount of love into the sequel.

And it shows. Frozen II is beautifully animated and a visual wonder, with a few set-pieces – such as Elsa’s confrontational encounter with a water spirit – as jaw-dropping as anything in the original. Speaking of which, the four elemental spirits – central to the plot - are wonderfully personified, especially the lumbering Earth spirits...menacing behemoths made of dirt and rock. Though the film is darker in overall tone, there are still plenty of moments of levity, such as Kristoff & Sven’s musical number, “Lost in the Woods,” a hilarious and spot-on send-up of ‘80s power ballads .

But as meticulously crafted as it is, Frozen II never reaches the heights of the first film. The plot – Elsa trying to save Arendelle by reconciling with the Enchanted Forest’s Northuldra tribe – is murkier. There ultimately isn’t much in the way of real conflict. Despite earning another Oscar nod for “Into the Unknown,” none of the songs are as insanely catchy as “Let it Go” (though some might see that as a good thing). And if you always found Olaf more annoying than funny, this one ain’t gonna change your mind.

Still, for a film that isn’t nearly as memorable as the original, Frozen II certainly gets points for sincerity. As sequels go, it’s no Toy Story 2, but it’s well-crafted, visually impressive and fairly entertaining. If expectations are kept in-check, no one’s likely to walk away feeling short-changed (especially kids).

EXTRA KIBBLES
SING-ALONG VERSION OF THE FILM
"DID YOU KNOW???” - Frozen II trivia.
"THE SPIRITS OF FROZEN 2” - Behind-the-scenes with animators who created and illustrated the spirit characters.
"SCORING A SEQUEL” - Featuring composer Christophe Beck
"GALE TESTS” - Test footage - both CG and hand-drawn, with comments by the directors.
OUTTAKES
DELETED SCENES – Unfinished animation that didn’t make the final cut.
DELETED SONGS – Accompanied by unfinished animation.
SONG: “INTO THE UNKNOWN” - The Oscar nominated song, presented in 29 languages.
2 MUSIC VIDEOS – By Panic! At the Disco & Weezer (not your usual Disney choices, are they?).
SONG SELECTION – Jump to any song in the film.
DVD & DIGITAL COPIES
KITTY CONSENSUS: