THE CLIMBERS and the Sad State of Everest 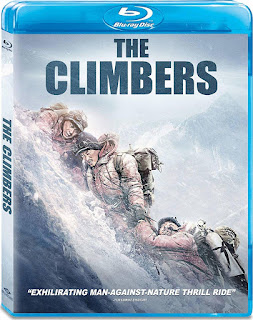 Not long ago, My wife showed me some current photos of Mt. Everest. The summit looks like a New Jersey landfill, littered with garbage and human waste from thousands of tourists over the years. It's a far cry from the days when conquering the world’s highest mountain was a triumph of the human spirit.

To recreate one of those historic treks, it appears the makers of The Climbers resorted to using other locations and plenty of CGI. If Everest's current state was the reason, that's pretty damn sad.

Inspired by true events, The Climbers is about two famous Chinese ascensions up Everest, both led by Fang Wuzhou (Wu Jing). The first is made in 1960, but not recognized internationally because photographic evidence is required and their camera was lost in an avalanche. Fang’s reputation is tarnished, his group disbands and his relationship with girlfriend Xu Ying (Zhang Ziyi) ends acrimoniously.

But Fang gets another crack at the mountain in 1975 with a government-backed expedition. He gets the old crew back together and they train a new batch of eager young mountaineers. Conveniently, Xu Ying is also on-hand to provide storm data and additional drama. The remaining half of the film features the climb itself, which is, of course, fraught with enough peril for two movies...killer wind, blinding snow, avalanches, runaway boulders, tragic accidents, crushed limbs and equipment breaking at the worst possible moment.

I’ve got no idea how much of this is historically accurate, though I suspect dramatic liberties have been taken. Granted, I’ve never scaled a mountain myself – traversing my roof to clean the gutters is thrilling enough, thank you – but the action is depicted like a Die Hard movie with Fang as its John Maclane. And that’s okay, since I don’t think the film is intended as a history lesson. Some of the sequences – while outlandish and CGI-heavy – are pretty exciting, even suspenseful at times. Less interesting are the characters. Fang is likable, boosted by Jing’s earnest performance, but his relationship with Xu Ying is contrived and pointless. None of the other characters register much and Jackie Chan fans should note that he only has a cameo during an end-credits coda.

Speaking of which, the film ends with vintage footage of the actual mountaineers during the 1975 expedition and is dedicated to their accomplishment (which was apparently a great source of national pride). Their story is movie-worthy enough without the heavy-handed – and likely embellished – melodrama that sometimes threatens to undermine things. If you can power through all that, The Climbers is worth checking out.

Now if they could only keep all the filthy tourists from checking out the real Everest.