The Antisocial Antics of PLAYING WITH FIRE 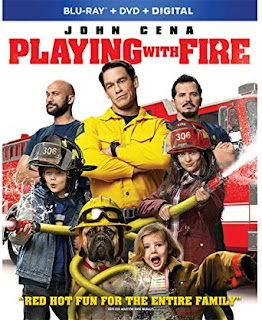 The bloopers are the funniest part of Playing with Fire. Whoever assembled this disc must’ve known it, too, because the same gag reel is featured twice, first during the end credits, then as one of the bonus supplements. Other featurettes show the cast clearly having a great time.

However, the movie itself is painfully unfunny. From the opening scene – so over-the-top that I first thought it was a dream sequence – Playing with Fire sinks under the weight of its own stupidity, an almost plotless parade of broad slapstick, obnoxious caricatures and heavy-handed sentimentality.

The film squanders the comic talents of John Cena, John Leguizamo and Keegan-Michael Key, all of whom are simply dumbfounded straight-men to three troublemaking kids. None of the children are remotely likable and the entire premise rests on the conceit that their “mischief” is funny, when actually their behavior borders on antisocial. Despite the fact their lives were just saved, teenager Bryann is full of nothing but eye-rolling sarcasm and steals a couple of vehicles (destroying both), younger brother Will gleefully causes massive amounts of property damage and screeching toddler Zoey predictably poops her pants, leading to an interminable scene where Cena is forced to change her (in full protective gear, of course).

The actions of these little urchins would have Mike & Carol Brady considering infanticide. Instead, the story takes a sudden saccharine turn once the fate of their parents is revealed. All is forgiven and forgotten as Jake (Cena) and his crew instantly become loving, protective guardians, spoiling the hell out of them with a birthday celebration that would humble Veruca Salt. As irritating as the first half is, the second is almost unbearably sappy and the expectation that the audience will feel the same warm fuzzies is almost insulting.

Undiscriminating children might enjoy it once or twice. Everyone else will find Playing with Fire an excruciating endurance test, making Problem Child look like Matilda. A complete waste of a fine cast, it’s bewildering that anyone involved thought this was a worthwhile use of their talent. The whole film is pandering, cynically assembled and almost completely laugh-free.

EXTRA KIBBLES
FEATURETTES - “Lighting Up the Laughs” (behind the scenes); “The Director’s Diaries: Read by the Star Cast (title tells all); “The Real Smokejumpers: This is Their Story” (interesting but ironic, considering how little smokejumping is actually featured in the film); “What it Means to be Family”; “Storytime with John Cena.”
DELETED SCENES
BLOOPERS – Same as those in the end credits.
DVD & DIGITAL COPIES
KITTY CONSENSUS:

BLEH! LIKE COUGHING UP A HAIRBALL.
Posted by D.M. Anderson at 4:42 PM