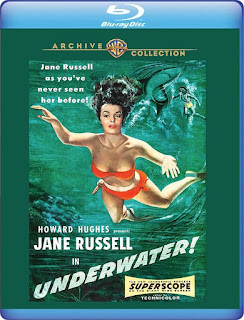 When I was a kid, Jane Russell was simply the Playtex bra lady on TV who looked like my sixth grade music teacher. Then I saw The Outlaw years later and, uh...wow. Turned out  Ms. Russell didn’t always look like my music teacher and I could suddenly appreciate why she became the bra lady.

Ol’ Howard Hughes appreciated her, too (or at least part of her). Russell was prominently featured and promoted in a lot of films he produced, even if she wasn’t always essential to the plot, such as Underwater! The actual star is Richard Egan as Johnny Gray, a diver looking for a huge treasure locked in the hull of a sunken ship, which is precariously resting on the edge of a ravine. Along with mercenary buddy Dominic (Gilbert Roland), they try to get the gold off the ship while thwarting a boat of suspicious locals who appear to want to cut-in on the action.

I say ‘appear’ because these three fishermen seem merely curious, not menacing, nor do they actually threaten our treasure hunters. Still, Johnny & Dominic invite them on-board for drinks before beating their asses and leaving them stranded on a nearly island. The fishermen return later with guns, understandably pissed. Considering he’s the protagonist, Johnny’s actually kind-of a dick throughout most of the movie.

But let’s not get hung up on such trifles as the plot (which is wafer-thin, anyway). Underwater! was obviously intended to be looked at, not scrutinized. As such, the film is kinda fun, with impressive underwater photography, decent special effects and handsome production design. Stylistically, the film could have been an inspiration for 1977’s The Deep, another underwater action film that capitalized on the physical assets of its female star.

Speaking of which, Russell provides plenty of window dressing as Johnny’s wife, Theresa (co-star Lori Nelson’s no slouch, either). While Underwater! isn’t quite as voyeuristic as The Outlaw, director John Sturges provides ample moments featuring Jane’s fine form in a variety of swimwear, both in and out of the water (undoubtedly at Hughes’ insistence). Who cares if her character only exists to be put in peril, or that high-heels are the worst possible choice for boating shoes?

While I’m a big fan of John Sturges, it’s obvious he’s a director-for-hire here. Underwater! certainly isn’t a high point in the careers of anyone else involved, either. Still, it’s an enjoyably lightweight, undemanding adventure film with a bit more to offer than just Jane and her two friends.