THE POOP SCOOP: Movie of the Week Edition

FROZEN 2 on Digital 2/11 and Blu-ray & 4K UHD on 2/25
In Frozen 2, the answer to why Elsa was born with magical powers is calling her and threatening her kingdom. Together with Anna, Kristoff, Olaf and Sven, she sets out on a dangerous but remarkable journey. In Frozen, Elsa feared her powers were too much for the world. Now she must hope they are enough. From the Academy Award-winning team—directors Jennifer Lee and Chris Buck, producer Peter Del Vecho and songwriters Kristen Anderson-Lopez and Robert Lopez—Frozen 2 features the voices of Idina Menzel, Kristen Bell, Jonathan Groff and Josh Gad.  Bonus features include deleted scenes, deleted songs, Easter eggs, outtakes and a sing-along version with lyrics to the film’s forever-infectious songs. Go behind-the-scenes to hear personal, making-of stories from the cast and crew. Fans who bring the film home early on Digital will receive two exclusive extras: an interview with songwriters Kristen Anderson-Lopez and Robert Lopez, who won an Oscar for Best Original Song (“Let It Go,” 2014) and wrote seven original songs for “Frozen 2,” and a deleted song titled “Unmeltable Me.”
UNCUT GEMS on Digital 2/25 and Blu-ray & DVD 3/10
Adam Sandler gives “a mythologically great performance” (Robbie Collin, The Telegraph) in a critically-acclaimed thriller co-written and directed by brothers Josh and Benny Safdie (writers and directors of Good Time). The film played at both the Telluride Film Festival and the Toronto International Film Festival to rave reviews and is Certified Fresh on Rotten Tomatoes. Uncut Gems stars Golden Globe nominee Adam Sandler (2003, Best Performance by an Actor in a Motion Picture – Comedy or Musical, Punch-Drunk Love), LaKeith Stanfield, Kevin Garnett, Idina Menzel, Eric Bogosian, and Academy Award nominee Judd Hirsch (1981, Best Actor in a Supporting Role, Ordinary People). Executive produced by Martin Scorsese. 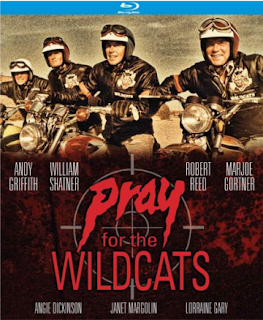 PRAY FOR THE WILDCATS and SUPERDOME on Blu-ray 3/20
In PRAY FOR THE WILDCATS, a power-mad tycoon (Andy Griffith) challenges three advertising executives to a motorcycle trip down Mexico's Baja Peninsula, a weekend getaway that turns into a nightmare of desert warfare. For the trio (William Shatner, Robert Reed and Marjoe Gortner), the initial lure is a multi- million-dollar account, but a sudden terrifying incident along the ride reveals their unpredictable client's real intentions: to test just how far the men will go to save their careers and their families. As the action intensifies, so do the fascinating character dynamics, driving this engrossing thriller to its startling climax. Wonderfully directed by Robert Michael Lewis and co-starring Angie Dickinson, Janet Margolin and Lorraine Gary. 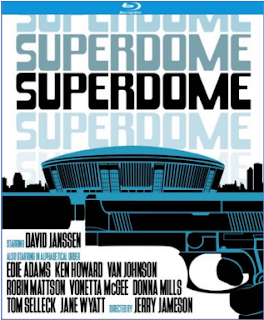 In SUPERDOME, the star players for the Cougars, gathered in New Orleans for the big game, are preoccupied with some serious off-the-field issues. Dave Walecki's (Ken Howard, 1776) marriage to his wife Nancy (Susan Howard, TV's Dallas) is falling apart, while Jim McCauley (Tom Selleck, An Innocent Man) is involved in a shady deal with a management firm that could destroy his career. But that's nothing compared to the real drama. There's an assassin killing off many of the team's personnel (as well as their chances of winning)! David Janssen (S.O.S. Titanic) stars as the team manager, who races against time to identify the killer before it's too late. This made-for-television thriller was directed by veteran filmmaker Jerry Jameson (Airport '77, Raise the Titanic) and co-stars Edie Adams (The Oscar), Donna Mills (Play Misty for Me), Van Johnson (23 Paces to Baker Street), Vonetta McGee (The Eiger Sanction), Jane Wyatt (Pitfall), Robin Mattson (Return to Macon County), M. Emmet Walsh (Blood Simple) and NFL legends Bubba Smith (Police Academy) and Dick Butkus (TV's Blue Thunder).
Posted by D.M. Anderson at 3:30 PM