GIRL ON THE THIRD FLOOR and the Repair Job from Hell 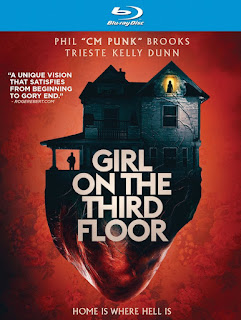 For a while, I really empathized with Don Koch (Phil Brooks). Here’s a guy trying to get a fresh start by renovating the old suburban house he just purchased, so it’s all ready when his wife arrives. However, he ain’t much of a handyman. And I can relate. Hell, it takes me a half-dozen bent nails and a repeatedly-hammered thumb just to put up a picture which will inevitably end up hanging crooked. It’s therefore my philosophy that if something can’t be fixed with duct tape, it is irreparable.

Still, Don is persistent, even though he generally ends up making things worse. It seems as if the whole house is working against him. Which it is, of course, spitting slime, goo & occasional marbles from every pipe, crack and socket. It turns out Don bought an old whorehouse that happens to be haunted by its former occupants, so I can hazard a guess what the white goo is supposed to be.

But by then, my empathy for Don had dissipated. It turns out he’s kind of an asshole, taking a break to cheat on his pregnant wife with Sarah (Sarah Brooks), a mysterious woman who he shuns after their initial tryst. But she’s got a sinister agenda and it doesn’t take a slide rule to figure out she’s part of the house’s dark past, which tends to bring out the worst in those who are inherently awful people. And the more we learn about Don’s past, the more we’re convinced he deserves what’s coming to him, and probably why the narrative focus wisely shifts to his wife, Liz (Trieste Kelly Dunn), during the second half.

But we don’t necessarily have to like a main character to be engaged in his predicament. While Girl on the Third Floor doesn’t offer too many surprises, it’s a fairly enjoyable entry in the haunted house subgenre, checking off the usual tropes with economic flare and throwing in a few enjoyably nasty scenes along the way (such as Don’s unfortunate encounter with a wayward marble). Phil Brooks (“CM Punk” to WWE/MMA fans) sort-of has the mannerisms of a young Bruce Campbell and does a decent job in his first feature film, suggesting a possible B-movie career if he ever decides to give up his day job.

Girl on the Third Floor doesn’t quite sustain its premise to the end, with a final act & denouement that descends into predictability. But until then, writer-director Travis Stevens has put together a fun little time killer, one that might also make those who don’t know a claw hammer from a toilet plunger feel better about themelves.