THE SIREN: There Must Be Something in the Water 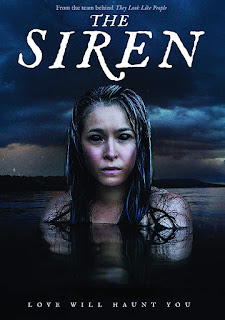 One unique aspect of The Siren – for horror movies, anyway - is that one of its main characters happens to be gay, yet in-no-way is his sexuality part of the story. Al (MacLeod Andrews) is simply out to avenge the death of his husband, who he’s certain was killed by a mythical siren that lurks in a woodland lake. Turns out he’s right, of course, otherwise no movie.

Ever vigilant, Al lives by the same lake, where quite a few people have drowned over the years. Then Tom (Evan Dumouchel) arrives to stay in a rented cabin nearby. He informs Al he’s mute, the result of a swimming accident as a boy, so he has a healthy respect for the water. Later, a mysterious woman named Nina (Margaret Ying Drake) swims up to the dock. She’s the titular character, of course, and sets her sights on Tom as her next quarry. He becomes enamored with Nina, even after her first attempt to drown him. Once Al learns she's the siren he's been looking for, he wants to kill her before she claims another poor rube.

It’s a promising set-up for an intriguing three-character drama, whichThe Siren fulfills only sporadically. The characters are interesting and the setting is wonderfully atmospheric, enhancing the film’s melancholy tone. However, it’s unnecessarily ambiguous for long stretches. There’s no problem with a filmmaker trying to disorient the viewer by having them question what’s real or a character’s imagination. In Tom’s case, since he’s supposedly enchanted by Nina, these surreal sequences are quietly unnerving. But it eventually grows more confusing than engaging, especially once the narrative starts jumping from one unrelated scene to another with no transition (such as Nina’s encounters with a young child late in the film).

Considering its artier pretensions comprise a majority of the running time, The Siren might have been better as a short. Still, one has to admire writer-director Perry Blackshear’s ambition. Both technically and narratively, he instills it with just enough quirks to make it worth checking out.