BLACK ANGEL and the Power of Forgiveness 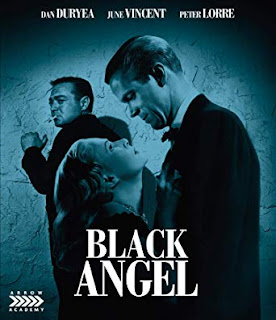 Bitchy lounge singer Mavis Marlowe is murdered in her apartment and John Bennet is the poor sap who goes down for the crime. However, John’s wife, Catherine (June Vincent), is convinced he’s innocent. Well, maybe innocent is the wrong word. After all, he was having an affair with Mavis, who was also blackmailing him. But Catherine certainly doesn’t think he’s capable of murder.

That’s pretty damn forgiving, if you ask me. Maybe it’s my inherently vindictive nature, but if my wife was banging a guy who later turned up dead, I doubt I’d work that hard to clear her name.

Instead, Catherine requests the help of Martin Blair (Dan Duryea), Mavis’ perpetually drunk ex-husband who was still hopelessly in love with her. He’s also the last person to see her alive, having previously visited her apartment hoping to rekindle their relationship (which she cruelly rejected). Still, he goes all-in to help find the real killer.

Not that I wish ill will on my own ex-wife, but we got divorced for a reason and I’m not sure how much concern I’d muster if she were to meet a sudden end through foul play. I guess that makes Mavis a better man than me.

The investigation seems simple enough. Mavis was wearing a unique brooch Martin once gave her, but now missing. Find the brooch, find the killer. Their primary suspect is shady nightclub owner Marko (Peter Lorre). Martin and Catherine pose as a lounge act to get closer to him, during which time Martin falls in love with her (boy, he sure got over Mavis fast).

Black Angel is a minor but enjoyable piece of film noir, well directed by the prolific Roy William Neill (best-known for Sherlock Holmes films). Additionally, the performances are good, especially Lorre’s. The film really pops when he’s on- screen, which unfortunately isn’t all that long. The initial set-up is intriguing, as is the race against time to find the culprit before John is executed. However, the story grows increasingly predictable, with Martin’s alcoholism more-or-less telegraphing the twist ending.

Until then, Black Angel won’t make anyone forget Double Indemnity, but it's entertaining enough to be worth seeking out by film noir fans. Rescued from relative obscurity by Arrow Academy, the film has been nicely restored for Blu-ray and comes with a few interesting bonus features.