CIMARRON and the Great Escape 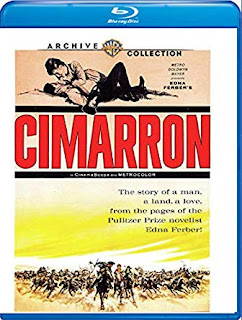 Maybe it’s just the way I’m wired, but while watching Cimarron, I found myself often questioning Yancey Cravat’s real motives for his actions, not-to-mention his taste in women.

Yancey (Glenn Ford) is a man whose past sounds far more interesting than his present status. Throughout the film, we’re dropped hints of his old life. Gunfighter, rustler, gambler, man-of-action, he’s been around the block a few times, which also included a lusty relationship with dance-hall girl Dixie Lee (Anne Baxter).

He’s since given all that up to settle down with new bride Sabra (Maria Schell), hoping to claim a prime piece of property during the Oklahoma Land Rush. But he’s bested by Dixie herself and ends up starting a newspaper in the newly-established town of Osage. He’s also developed an unshakable code of ethics, frequently advocating for Indian rights, exposing injustices and trying to steer troubled young outlaws down the right path.

But Yancey often goes out for a pack o' smokes – sometimes for years – to engage in some kind of adventure or crusade. Upon returning, he professes his love for his wife and son. He probably really means it, too, though I suspect that he simply can’t stand being around her for very long.

Nagging, petty, whiny, self-absorbed and nearly as racist as some of the guys Yancey’s squared off against, Sabra’s a real shrew. While it’s difficult to fathom what he saw in her in the first place – especially with Dixie throwing herself at him (good God, are you blind, man?) - it’s easy to see why risking his life on the front lines is preferable to staying home. Which is ironic when you consider Sabra’s actually the main character in Edna Furber’s original novel. Maybe she’s more engaging in the book, but here, it’s no wonder much of the film’s focus is on Yancey.

When depicting Yancey’s overall badassery, whether avenging a lynching or rescuing children from bandits, Cimarron is a lot of fun. He’s a tough-but-compassionate hero whose stoicism is admirable and Ford provides the understated gavitas his character needs. It’s too bad the story doesn’t follow Yancey on all his adventures, because what he’s doing in Cuba has to be more interesting than watching Sabra run the newspaper, bitch about her husband and alienate her son. So while I certainly understand why Yancey’s always stepping out, the story slows to a crawl when he ain’t around.

Until the anti-climactic final act – Yancy’s completely out of the picture by now - Cimarron is generally pretty interesting as one of Hollywood earliest revisionist Westerns. It’s also beautifully shot, filled with vivid, panoramic landscapes which add to the epic feel of the film. Still, I can’t help but think if he had just re-connected with Dixie, Yancey would feel less compelled to leave home all the time. Then again, I’ve always had a thing for Anne Baxter, so maybe it’s just me.