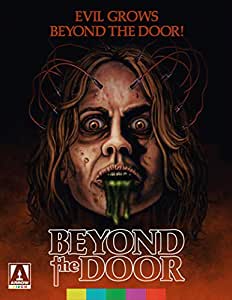 BEYOND THE DOOR on Blu-ray 3/24
Legendary filmmaker Ovidio G. Assonitis, whose Tentacles and Piranha II sought to cash in on the killer fish craze spawned by Jaws, first hit pay dirt in 1974 with Beyond the Door - a gloriously bonkers riff on The Exorcist featuring Emmy Award-winning actress Juliet Mills and distinguished British actor Richard Johnson. Set against the backdrop of San Francisco, Beyond the Door stars Mills as Jessica Barrett, a young mother who starts to develop strange behaviors whilst pregnant with her third child. Before you can say "split pea soup", Jessica is displaying signs of full-blown demonic possession - complete with projectile vomiting and fully-rotating head! Could it be that she's carrying the child of the Antichrist himself? Described as "disgusting", "scary trash" and "maddeningly inappropriate" by film critic Robert Ebert and subject to a lawsuit by Warner Bros. (who claimed copyright infringement against a certain William Friedkin film), the devilish denizens at Arrow Video have summoned up this wickedly entertaining popcorn spiller in a brand new, extras-packed edition fit for Satan himself! 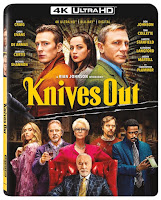 KNIVES OUT on Digital 2/7 and 4K, Blu-ray, DVD & On Demand 2/25
The circumstances surrounding the death of crime novelist Harlan Thrombey are mysterious, but there’s one thing that renowned Detective Benoit Blanc knows for sure—everyone in the wildly dysfunctional Thrombey family is a suspect. Now, Blanc must sift through a web of lies and red herrings to uncover the truth. From acclaimed writer-director Rian Johnson comes this suspenseful, twist-filled whodunnit with an all-star ensemble cast including Daniel Craig, Chris Evans, Ana de Armas, Jamie Lee Curtis, Michael Shannon, Don Johnson, Toni Collette, LaKeith Stanfield, Katherine Langford, Jaeden Martell, Christopher Plummer, and more. Take home Knives Out and immerse yourself in the mystery with special features including audio commentary and in-theatre commentary by filmmaker Rian Johnson, two never-before-seen deleted scenes, the eight-part “Making a Murder” documentary, the “Rian Johnson: Planning the Perfect Murder” featurette, a Q&A with the director and cast, and so much more. 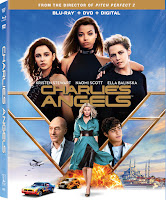 CHARLIE'S ANGELS on Digital 2/18 & 4K Ultra HD, Blu-ray, and DVD 3/10
Director Elizabeth Banks takes the helm as the next generation of fearless Charlie’s Angels take flight. In Banks’ bold vision, Kristen Stewart (Sabina), Naomi Scott (Elena), and Ella Balinska (Jane) are working for the mysterious Charles Townsend, whose investigative agency has expanded internationally. The new Angels are among the world’s smartest, bravest, and most highly trained women all over the globe. Under the guidance of Bosley (Elizabeth Banks), the Angels have to protect a revolutionary technology from becoming weaponized. They will have to rely on each other as their assignment becomes increasingly treacherous and even those closest to them can no longer be trusted. The bonus materials include a hilarious gag reel, five deleted scenes, and four making-of featurettes with never-before-seen cast and crew interviews. Dive deep into the stunning costume design, high-octane stunt sequences, and learn how the stars bonded on set to form their own Angels’ sisterhood! 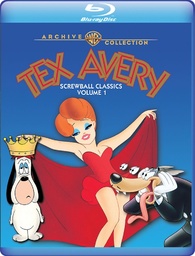 TEX AVERY SCREWBALL CLASSICS VOLUME 1 on Blu-ray 2/18
There were several masters of animation during Hollywoods golden era. Of the top two geniuses, one created elaborate fairy tales and ornate feature-length fantasias the other guy was Tex Avery. He just wanted to make you laugh. Having already been integrally involved in the development of Porky Pig, Daffy Duck and Bugs Bunny for Warner Bros., Avery moved to MGM in 1941 to create a set of comedy masterpieces that defined a new slapstick style for animation, inspiring cartoonists, comedians and filmmakers for decades to come. Averys unit at Metro Goldwyn Mayer was all about breaking the fourth wall, shattering expectations and making audiences fall down with laughter. His one-shot masterpieces, including Bad Luck Blackie, Red Hot Riding Hood and Symphony in Slang, have proven themselves pure gold. And continuing characters like Droopy, Screwball Squirrel and George & Junior not to mention Spike, Red and The Wolf remain unforgettable comic personas among the top rank of cartoondom. Averys cartoons were ahead of their time and their time has come. Finally committed to Blu-ray , this first collection of restored Technicolor shorts feels fresh and new, and is funnier than ever. This set will delight young and old and will amaze a new generation ready to laugh again.