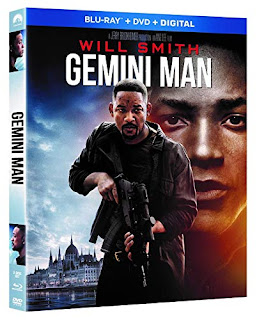 Ultimately, Gemini Man might have been partially undone by its own trailer, which spills the beans that Will Smith is a retiring government assassin forced to square-off against his younger self, an equally-skilled clone developed by his own people. But even though I think this is a dish that would have been best-served cold, it’s also a pricey, high-concept action picture and one would be hard-pressed to create any kind of promotional campaign that didn’t tease the viewer with two Will Smiths.

The problem is the way the narrative actually unfolds. Henry Brogan (Smith) is betrayed by the DIA after learning his last kill was not the terrorist he was led to believe, but a scientist working for the DIA on a black-ops project called ‘Gemini,’ headed by its nefarious director, Clay Varris (Clive Owen). Varris sends his best assassin to track-down and kill Brogan. Up to this point, Gemini Man is a watchable-but-unremarkable thriller featuring solid performances by Smith and Mary Elizabeth Winstead, the latter of whom who is a tough, resourceful DIA agent originally assigned to keep an eye on him, but ends up a target herself.

Neither learns who’s actually hunting them until well-into the second act and it's obviously intended to be the story’s big revelation. But since the audience is privy to all of this from the get-go, instead of being pleasantly surprised by the sudden plot twist, we spend the first hour waiting for Brogan to figure out what we already know. The remainder of the film plays itself out in predictable fashion and is certainly watchable, but I suspect viewers going into this completely cold would have a lot more fun with it.

Elsewhere, Gemini Man works best when director Ang Lee briefly returns to his comfort zone, which is exploring the internal conflict of both Brogan and “Junior,” the latter of whom is also played by Smith through motion capture and CGI. Speaking of which, the ballyhooed “de-aging” of Smith works about as well as it has in other recent films like The Irishman and Endgame: Not entirely convincing, but less of a distraction once we acclimate ourselves. The action itself ranges from exciting to ridiculous. A close-quarters fight in the catacombs of Budapest is impressive, but a CGI-heavy motorcycle chase earlier in the film plays more like a Grand Theft Auto mission. The climax itself has our protagonists surrounded by dozens of Gemini super-soldiers, yet they’re collectively worse shots than Imperial Stormtroopers and are little more than canon fodder.

But again, Gemini Man is ultimately more of a marketing mistake than a failure as a film. The characters and performances are enjoyable and even the action is kind-of fun, like an exciting video game. However, the overall narrative is hampered by waiting so long to reveal what we already know without really expanding on such an inherently intriguing concept any further.

EXTRA KIBBLES
FEATURETTES - “The Genesis of Gemini Man” (the film does have an interesting history, going back a few decades); “Facing Your Younger Self”; “The Future is Now”; “Setting the Action”; “Next Level Detail”; “The Vision of Ang Lee” (A majority of these bonus features cover the special effects and technical aspects of the film, featuring interviews with the primary cast, director Ang Lee, producer Jerry Bruckheimer and various effects artists & stunt performers.)
ALTERNATE OPENING
DELETED SCENES
DVD & DIGITAL COPIES
KITTY CONSENSUS: