PARASITE Available Now on Digital, on Blu-ray and DVD 1/28
A volatile, symbiotic relationship between the uber-wealthy and the have-nots comes into full display in PARASITE, from Universal Pictures Home Entertainment and NEON. Proclaimed as “wickedly clever” (GQ) and “the definition of a must-see experience” (The Atlantic), PARASITE is a riveting, genre-bending thriller that combines masterful filmmaking with a fresh look at class discrimination, making it “a flat-out masterpiece” (Deadline). Hailed as “the best work yet from master filmmaker Bong Joon Ho (Okja, Snowpiercer)” (Awards Circuit), who directed and co-wrote the film alongside Han Jin Won (Okja), fans can now delve deep into the mind of Bong, and the symbolism behind PARASITE with an exclusive Q&A bonus feature with the acclaimed director. The captivating PARASITE has made history as the first Korean film to be nominated for an Oscar.  It has garnered six Oscar nominations including Best Picture, Best Director, Best Original Screenplay, Best International Film, Best Production Design and Best Editing, a 2020 SAG Award nomination for Outstanding Performance by a Cast in a Motion Picture and was the winner of the 2020 Golden Globe for Best Foreign Film.  Additionally, the film has racked up over an astonishing 100 award nominations to date.
FORD v FERRARI on Digital 1/28 and 4K, Blu-ray and DVD 2/11
Matt Damon and Golden Globe Nominee Christian Bale star in this “thunderously exciting” (Peter Travers, Rolling Stone) film based on the remarkable true story about Ford Motor Company’s attempt to create the world’s fastest car. American car designer Carroll Shelby (Damon) and the fearless British-born driver Ken Miles (Bale), together battled corporate interference and the laws of physics to build a revolutionary race car and take on Enzo Ferrari at the 24 Hours of Le Mans in France in 1966. Certified-Fresh on Rotten Tomatoes, critics and fans alike have raved about this epic underdog tale that will keep your heart pounding from start to finish. Add FORD V FERRARI to your digital collection on Movies Anywhere January 28 and buy it on 4K Ultra HD, Blu-ray and DVD February 11 to add a piece of history to your film collection. 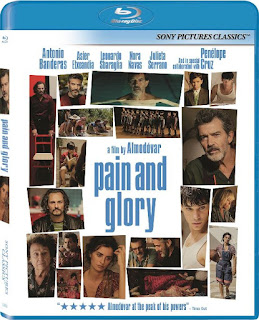 PAIN AND GLORY on Digital 1/14 and Blu-ray & DVD 1/21
PAIN AND GLORY tells of a series of re-encounters experienced by Salvador Mallo (Antonio Banderas), a film director in his physical decline. Some of them in the flesh, others remembered: his childhood in the 60s, when he emigrated with his parents to a village in Valencia in search of prosperity, the first desire, his first adult love in the Madrid of the 80s, the pain of the breakup of that love while it was still alive and intense, writing as the only therapy to forget the unforgettable, the early discovery of cinema, and the void, the infinite void that creates the incapacity to keep on making films.
Posted by D.M. Anderson at 3:03 PM