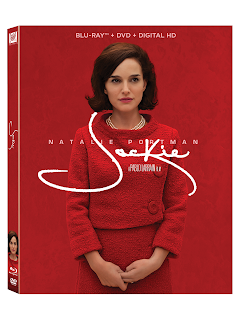 Natalie Portman's performance is the primary reason to see Jackie.

It doesn't seem like much, at first. In fact, although Portman certainly resembles the beloved former first lady, it initially comes across as a well-rehearsed caricature, with little depth behind the look and voice. Then again, that was how Jacqueline Kennedy was presented to the public...on television, in particular.

It isn't until Jackie delves into the first lady's tumultuous days after the JFK assassination that we realize how dynamic Portman's performance really is. Oscar-worthy? That's debatable, but there's no denying she presents a masterful dichotomy between the charming & mannered public figure we're familiar with, and the one who never seemed completely comfortable with her role as the first lady.

Presented mostly in flashback through an interview she gives to a magazine writer (Billy Crudup), we see how this national tragedy affected her personally. Aside from being obviously distraught, Jackie is confused and overwhelmed, with both her husband's death and uncertainty of what is expected from her. Feeling mostly alienated from those in her immediate circle (not-to-mention just a bit resentful of Lyndon & Lady Bird), she really only lets her guard down to a priest (John Hurt, in his last role) and this writer she barely knows. And because we see Jackie as two different people, the so-called shallower segments actually end up being quite revealing.

Since the film is not-so-much a biography as it is the portrait of how she mourns Kennedy as a husband and honors him as a leader (it's also hinted that a bit of estrangement had crept into their marriage), Jackie isn't exactly a ball of fun. And in a late sequence that's both harrowing and graphic, Kennedy's assassination is depicted through Jackie's eyes. It's hard to fathom what it must have felt like to endure such a tragedy, especially while being watch by the world, but Portman is at her best during these moments. Other scenes, while we admire the depth of her performance, aren't quite as emotionally compelling. Somewhat surprisingly, none of the other characters, including Robert Kennedy (Peter Sarsgaard), are fleshed out in enough detail to make them interesting.

Jackie is aided greatly by its attention to period detail (the costumes & production design are outstanding) and a screenplay that empathizes with its subject while resisting the temptation to deify her. While I question how often someone would want to revisit this dark chapter in Jacqueline Kennedy's life, the film does a good job humanizing her. Just don't expect to feel great afterwards, despite the joyous tune from Camelot fittingly playing during the fade-out.

NOT BAD...MOSTLY DUE TO NATALIE PORTMAN'S PERFORMANCE
Posted by D.M. Anderson at 9:58 PM