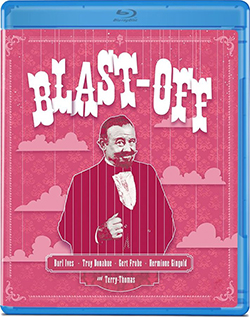 Long ago, Jules Verne adaptations were all the rage on both sides of the Atlantic. His name was often featured more prominently than the cast, sometimes even incorporated in the title, much like Stephen King in the 80s. Even tenuous ties to a renowned author was a viable marketing tool. Though originally titled Jules Verne's Rocket to the Moon, this film is to Verne's writings what The Lawnmower Man was to King's story.

There was also a wave of British adventure-comedies in the 60s with such whimsical titles as Those Magnificent Men in Their Flying Machines (and it's sequel, Those Daring Young Men in Their Jaunty Jalopies). For it's US release, this film was more accurately retitled Those Fantastic Flying Fools, suggesting a spiritual sequel (and why not, since a few prominent British actors appear in both films?).

It was eventually trimmed by nearly a half-hour and rechristened yet-again as Blast-Off. It's been restored to its original length for this Blu-Ray release. Though the title card reads Those Fantastic Flying Fools, the Blu-Ray cover still identifies it as Blast-Off (one of the ugliest Blu-Ray covers I've ever seen, by the way). Hopefully, this clarifies things for those who might have been seeking out this obscure film.

As for the movie itself, Burl Ives leads a rather large international cast as P.T. Barnum, a smooth-talking - and broke - huckster who escapes to England with his partner/underling Tom Thumb. After hearing a lecture by explosives expert Siegfried von Bulow (Gert Frobe), who wants to reach the moon by shooting a capsule from a massive cannon, Barnum gets behind the endeavor and recruits others to try and make it happen. Meanwhile, Charles Dillworthy (Lionel Jeffries), whose original spaceship design is discarded in favor of one by Gaylord Sullivan (Troy Donahue), plots with his brother-in-law (Terry-Thomas, once again playing...well, Terry-Thomas) to sabotage the launch.

Some of this is mildly amusing, especially von Bulow's explosives tests (he seems to simply enjoy blowing stuff up), though seldom uproarious. And, unlike the films it tries to emulate, Blast-Off is somewhat hampered by an obviously lower budget; the 'wacky' moments resemble something you'd see in a Benny Hill sketch. The film is also very leisurely paced for a comedy, though the cast appears to be having a good time.

Far from a classic, Blast-Off is harmless fluff that'll hold some nostalgic value to the few who recall enjoying it as children. Just don't expect your own brood to be quite as enthralled, as this film is undoubtedly a product of its time.