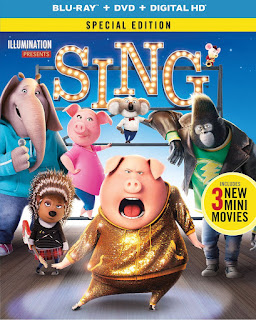 There's an early moment in Sing where a snail, perched atop a microphone, is auditioning for a spot in an upcoming singing competition by belting out the pop classic, "Ride Like the Wind." It's an ironically amusing scene in a movie which could have used a lot more of them. Most of the characters are represented by animals completely unrelated to their mannerisms (a pig as a housewife with 25 children?). They're simply human characters that just happen to look like animals.

That the film seldom finds anything creative to do with its anthropomorphic world is just one reason why Zootopia will still be talked about ten years from now, while Sing is destined for a yard sale once all the kids in the house have outgrown it. Another reason is the story itself...though "let's-put-on-a-show" has been a standard trope since the days of Mickey Rooney and Judy Garland, it's been given a timely spin reflective of our current culture: instant fame through a singing competition, complete with instantly recognizable rock & pop songs.

Maybe I'm wrong about Sing's potential shelf life. After all, it's far from the worst film to empty parents' wallets. However, stored in my attic are a boxes of DVDs that briefly amused my daughters as kids...Ice Age, Over the Hedge and dozens of other titles with little substance beyond aesthetics. But even now, they still enjoy Monsters Inc. on occasion.

Like most of Illumination Entertainment's other recent films (Minions, The Secret Life of Pets), Sing is meant to exist in the here-and-now, where its primary audience lives; let the likes of Pixar worry about any kind of lasting legacy. As such, the film plays like the characters were designed & cast, the songs selected & arranged - before a single line of dialogue was written - with kids in mind.

A cynical approach to a family film, perhaps, but that's probably okay. While in the moment, kids are likely to find Sing very entertaining. It's colorful, fast moving and occasionally laugh-out-loud funny. The characters aren't all that imaginatively conceived, but they're well animated and adequately voiced by a surprisingly large cast of A-list actors. The soundtrack is filled with the type of bouncy, danceable songs your kids keep on their iPhones (even the classic standards are given a modern pop makeover).

Sing will make its rounds at slumber parties and long drives to Grandma's house before the next disposable piece of pop culture begs your kids' attention (and at no time will they care that it would have made more sense for Rosita to be depicted as a rabbit). Then it will take its rightful place with the Madagascars, Flushed Aways and Monsters vs. Aliens of the world: decent enough family entertainment with a definite expiration date.
EXTRA KIBBLES
FEATURETTES: "The Making of Sing"; "Finding the Rhythm: Editing Sing"; "Character Profiles"; "Sing and Dance"
3 SHORTS: "Gunter Babysits"; "Love at First Sight"; "Eddie's Life Coach" (A separate makng-of featurette is also included)
MUSIC VIDEOS: "Don't You Worry 'Bout a Thing" featuring Tori Kelly; inlcudes making-of featurette); "Faith"; "Set it All Free"
"THE BEST OF GUNTER" - A collection of the character's lines from the film)
"THE SING NETWORK" - A collection of faux-commercials and character 'profiles'
DVD & DIGITAL COPIES
KITTY CONSENSUS: