Blu-Ray Review: WE ARE THE FLESH 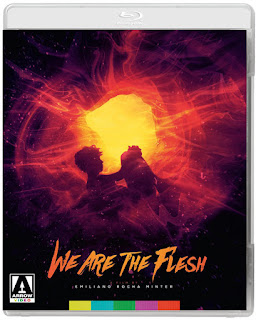 You'll be happy to learn that, even after the apocalypse, there will still be a limitless supply of duct tape.
Two sibling survivors, Fauna and Lucio (Maria Evoli & Diego Gamaliel), wander into an dilapidated warehouse where they meet a clearly psychotic vagrant named Mariano (Noe Hernandez), who feeds and shelters them for a price: They must help him convert the inside of the building into a womb-like cave. Eventually, they are also coursed to engage in incest, necrophilia, murder and cannibalism.

I had read & heard a lot about We Are the Flesh, both good and bad, prior to finally viewing it. Touted as surrealist art-horror by some, condemned as self-indulgent sleaze by others, there seems to be no middle ground. Regardless of which camp you'd plant your flag, I almost guarantee you haven't seen anything quite like it.

You'll also probably want to scrub-out your eyeballs afterwards. While not really a horror film, most of the imagery in We Are the Flesh is certainly horrific. It's loaded with grimy, semi-pornographic sex and (literally) in your face full-frontal nudity that's calculated to repulse more than titillate (if you are aroused, you've got issues, my friend). The film isn't particularly violent, save for one extremely graphic murder that goes on forever and is tough to endure in the context of why it's committed.

Little of it makes any actual narrative sense. Any "story" beyond the initial premise is nearly incomprehensible. Mariano rants and raves during the proceedings like the unholy offspring of Jim Morrison and Charles Manson, but none of his pseudo-philosophic ramblings render the movie any more coherent. Writer-director Emiliano Rocha Minter bombards us with gonzo grotesquery, then tacks on a twist ending that might impress anyone not completely baffled by the previous 75 minutes. But at-least that ending sort-of explains why all that duct tape is still available in abundance.

Only if viewed as some sort of twisted fever-dream does We Are the Flesh really work, and it's safe to say traditional horror fans will probably get more than they bargained for. The whole thing is also really pretentious, sometimes even tedious, including all the bizarre, perverse imagery Minter appears to enjoy rubbing our noses in long after it has dulled our senses. Some viewers may find it brilliant, and maybe there's something deeper here, but I sure as hell didn't find it. Perhaps someone should inform Minter that simply being uninhibited doesn't necessarily make you bold.