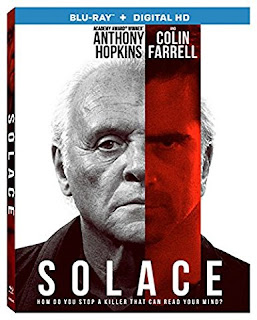 This one has an interesting history. An early version of the screenplay was once being groomed as a sequel to Se7en. Fortunately, someone wisely concluded Se7en was one of the last movies that ever needed a sequel, much less one featuring cops & killers with psychic abilities.

It's a decent premise, though, which eventually evolved into Solace. Anthony Hopkins plays John Clancy, a clairvoyant who's become a recluse since the death of his daughter to cancer. He reluctantly agrees to aid his friend, FBI agent Joe Merriweather (Jeffrey Dean Morgan), track down a serial killer. Clancy figures out that the one thing the victims have in common is they are all terminally ill, including a young boy whose brain tumor hadn't yet been discovered. This means the killer is psychic as well, with even stronger abilities. Since he can anticipate the FBI's every move well in advance, he's always several steps ahead of them, and develops a particular interest in Clancy.

Solace is one of those movies that, while not bad, should have been much better. What could have been a solid cat & mouse thriller starts off well enough, with good performances (Hopkins & Morgan in particular) and interesting visual flourishes when depicting Clancy's 'visions.' However, once the killer, Charles Ambrose (Colin Farrell), meets Clancy in a bar and shares his motives, any sense of menace dissipates and the tension begins to unravel. This is when the battle of wits between these two should be shifting into high gear, not descending into a moral debate.

I also found myself thinking Hopkins & Farrell's roles should have been reversed. Sure, Hopkins playing another serial killer wouldn't be the most creative casting decision, but you have to admit it'd be more fun. And if, as the killer, he was still forced to helplessly watch as his daughter dies, his motives would carry more weight.

But as it is, Solace is a decent enough way to spend an evening, stylish and efficient, but ultimately forgettable. Too bad, really...with a premise and cast like that, with some narrative tweaks, this could have been something really special.