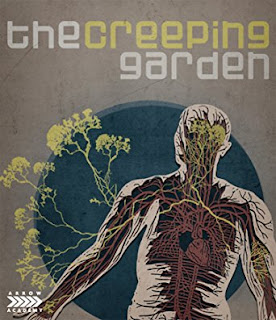 The Creeping Garden is a documentary about slime molds, something my high school biology teacher used to collect in Petri dishes and share with the same enthusiasm we generally reserved for achieving the highest Donkey Kong score. I don't know if he's still around, but I'm sure he would have appreciated a movie like this.

Slime molds hardly seem like compelling movie fodder. Directors Tim Grabham & Jasper Sharp must have thought so, too, which is perhaps why The Creeping Garden pays meticulous aesthetic homage to such quirky cult classics as Phase IV and The Hellstrom Chronicle. Indeed, listening to various experts discuss their research of slime molds (personifying these critters with the same enthusiasm as my biology teacher) would be an effective insomnia cure, if not for the rather stunning time-lapse photography, weird-ass synthesizer score (by former Sonic Youth member, Jim O'Roarke) and transitional title cards that would have looked right at home in a 70's sci-fi/horror film.

Content-wise, we learn what slime molds eat, how they grow & move, where they proliferate and, believe it or not, their ability to create music given the right electronic stimulation (something I certainly can't do). Some of it is interesting, other times it's like being back in biology class. Ironically, the most interesting information has nothing to do with slime molds at all: a segment which chronicles the history and evolution of 'moving pictures' and the time-lapse process.

Strictly from an entertainment standpoint, one can't help but wonder how much more fun The Creeping Garden would have been if it went "full Hellstrom," employing a hysteric "expert" to dish-out ominous and dire commentary, presenting slime molds as an unseen menace that could one-day inherit the Earth. After all, the other pieces are in place. Why not go the distance?

Still, the film is visually captivating enough to check out at least once. At the very least, it presents things living in your backyard in a way you've never seen before. I suppose that-alone qualifies The Creeping Garden as the Citizen Kane of fungus movies.