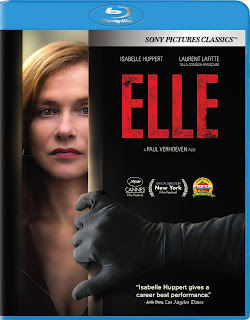 Regarding Elle: What the hell??

I had that reaction several times throughout this movie, which isn't necessarily intended as criticism. After all, it's directed by Paul Verhoeven, certainly no stranger to provocative material or ruffling feathers. It's been awhile since we've heard from him, and while it's nice to see he's lost none of his audacity, Elle is unlike anything he's done before.

In the opening scene, the main character, Michele (Isabelle Huppert) is brutally raped in her home by a masked assailant. However, she does not report it to the police, initially choosing to go on with her life as if everything is normal. Normal is a relative term, though. Michele owns and strictly runs a company which - ironically - produces video games with ample amounts of violence and sexual assault. She has a lazy, milquetoast son with a domineering girlfriend (who's pregnant with someone else's child), and is repulsed by her own aging, promiscuous mother (who is about to marry her latest man-toy). Michele infrequently sleeps with her best friend's husband, yet has mixed feelings about her own ex-husband's much younger new girlfriend. Her father, in prison for a mass murder spree 40 years ago, is due for a parole hearing; despite pleas from her mother, Michelle refuses to visit him. All the while, she's increasingly attracted to Patrick (Laurent Lafitte), who lives across the street with his wife.

Michele herself is emotionally aloof (to the point of appearing cold-hearted) and accustomed to being in control. In fact, when she finally does confide to those closest to her - during a dinner party - that she'd been raped, she is shockingly non-nonchalant, refusing to let the incident change her. Though they urge Michele to go to the police, we eventually learn why she doesn't: When she was ten years old, Michele's father involved her in the murder spree (though not the actual killings), and she remains tormented by the subsequent police investigation and media attention.

Then the movie gets weird (like I said...what the hell). Her assailant taunts her with threatening texts, and she initially suspects someone who works at her company (Michele isn't liked by her mostly male staff of designers, presumably because she's strong-willed and assertive). But after her rapist attacks again and she discovers who he is while fighting back, the decisions she makes afterwards might have the viewer thinking Michele has lost her mind (or was never right-minded to begin with).

In either case, Elle is both genre and expectation defying. Whether or not that's a positive is highly subjective. One thing it's definitely not is your traditional rape-revenge film. The scenes of sexual assault are unflinching and graphic, as is some of the violence, made more shocking by the main character's ultimate response, which will likely upset and anger some viewers. But even though we don't often understand, approve-of, agree-with or sometimes even like her, Michele is a strong, fascinating character, perfectly played by Huppert (this is easily the bravest performance of any of this year's Best Actress Oscar nominees).

One thing is certain...Elle is probably a film only someone like Paul Verhoeven could have pulled off this effectively; artfully made, yet incendiary and polarizing. You may not necessarily like what you see, but chances are you won't forget it anytime soon. That alone probably makes it worthy of attention.