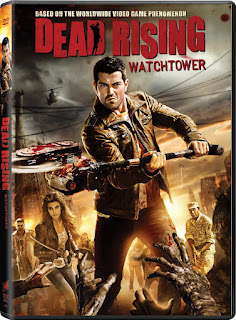 Just to show you how out-of-touch I am...

My oldest daughter saw this DVD screener on the dining room table and remarked, "They made a movie out of this?"

"Dad, Dead Rising is a super popular video game," she replied with just the slightest hint of amusement at my ignorance.

Needless to say, I have no frame of reference to judge how faithfully this film adheres to the game which inspired it. Though I occasionally indulge my road rage fantasies with a few rounds of Mario Kart, I've never been much of a gamer. Maybe that's why I was always able to appreciate the Resident Evil films on their own merits and enjoy them for what they are...mindless, flashy fun aimed at those who've probably never seen a real zombie movie. Maybe that's also why I found Dead Rising: Watchtower a reasonably entertaining way to kill two hours. I couldn't tell you if the premise, characters and occasional bits of off-the-wall humor are indicative of the video game series, but for a low budget zombie film which first premiered on Sony's Crackle network, I've seen a lot worse from the genre.

Dead Rising: Watchtower takes place in a fictional Oregon metropolis where zombie outbreaks are commonplace, but the infection can be neutralized with daily injections of Zombrex. When the drug suddenly stops working, the undead run rampant and the city is quarantined. Thousands are trapped inside, including an opportunistic reporter, a mysterious woman whose own stash of Zombrex still works, a grieving mother and a gang of lawless bikers taking advantage of the sudden anarchy. Outside the walls, the military tries to keep things contained while a national news network amusingly covers the events as they transpire. But not everyone is who they seem, and the government may be using this particular outbreak for a more nefarious agenda.


This is actually pretty plot heavy for a zombie film, with cover-ups and conspiracies surrounding the latest outbreak. Good thing said-plot is interesting enough for the viewer to forgive the fact it’s never very scary and only infrequently lets the blood fly. And despite the overall serious tone, there is a playful sense of humor which runs throughout the film, particularly the frequent newsbreaks featuring an overly-macho Rob Riggle as the lone survivor of a previous zombie attack.

Not everything works. Sometimes the plot depends too much on the stupidity of its characters and the epic scope of the whole event is occasionally undermined by the limited budget. Still, the performances are decent and, even running almost two hours, the film doesn’t wear out its welcome. You’ve probably seen better zombie movies, but scores more which are far worse.