Blu-Ray Review: THE INDIAN IN THE CUPBOARD Anniversary Edition 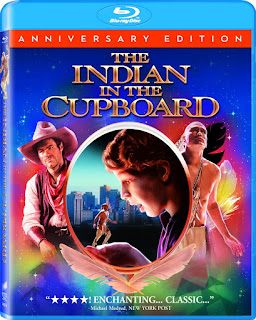 The Indian in the Cupboard is another one of those films which garnered good reviews when released back in 1995, but got lost in the shuffle of other blockbusters. Thanks to home video, it received a new lease on life and is now considered sort-of a minor classic. But unlike Sony's simultaneously released Anniversary Editions of Jumanji and Zathura, this is the first time The Indian in the Cupboard has ever been remastered and released on Blu-Ray.

This tale of a boy who receives a magic cupboard which can bring his toys to life has aged pretty well from a technical standpoint (the visual effects still hold up). However, it's far more low-key and deliberately paced than the usual FX-driven kid-friendly film, which sometimes works against it. These characters, while likable and well-performed by the entire cast (especially Litefoot in the title role), aren't always particularly interesting. Still, the concept alone lends itself to enough visually-captivating moments that we tend to stick around until the end of the ride.

If you always meant to include The Indian in the Cupboard in your collection but never got around to it, this is probably the perfect time. Those who already own it on DVD may still want to upgrade because the Blu-Ray transfer and 4K mastering make the film look brand new.

NOT BAD...FANS OF THE FILM WILL ENJOY THE BLU-RAY UPGRADE