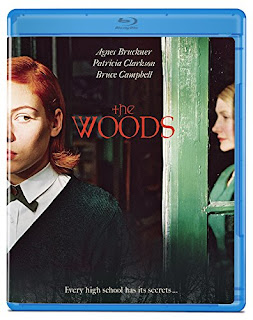 It’s 1965. Heather (Agnes Bruckner) is a troubled teen whose parents ship her to Falburn Academy, an all girls school in the middle of a forest. Her slacker dad (Bruce Campbell) can’t afford the steep tuition, but she’s allowed to stay because of a mysterious scholarship test administered by the dean, Ms. Traverse (Patricia Clarkson).

But Traverse isn’t quite who she seems, nor is the school itself, apparently still haunted by three red-headed witches who vanished into the woods decades ago (but not before killing the headmistress). Soon, Heather is tormented by bizarre visions (as well as a bullying classmate), while girls begin to mysteriously vanish. And of course...something’s out there in the woods.

The Woods is a deliberately-paced, atmospheric piece of gothic horror from Lucky McKee, best-known for the cult sleeper, May. Like most of his films, The Woods features quirky, complex female main characters, Clarkson in particular. She makes the most of this rare chance to play to truly creepy villain. On the other hand, the great Bruce Campbell is largely wasted in a role which makes no use of hisbeloved talents. Granted, McKee is obviously aiming for something different from Campbell’s usual forte. So why cast him in such a thankless role which could have been played by anybody?


Storywise, The Woods walks a familiar path. There aren’t too many surprises along the way and the climax is a bit of a let-down. But as the old cliche goes, sometimes the journey is more important than the destination. This particular journey is sometimes pretty interesting and even manages to instill a bit of dread on a few occasions.

Though it isn‘t likely to flat-out terrify anyone, The Woods is well made for what it is and worth checking out at least once. It’s not nearly as original or entertaining as McKee’s May, but it’s a nice take on a well-worm premise.