Your dreams can kill you ... A NIGHTMARE ON ELM STREET 8-CD BOX SET 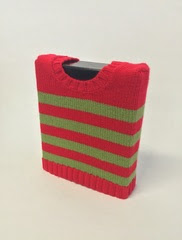 The Set Will Include All 8 Soundtracks and Expanded Bonus Music From the Original Film Series.

(September 18, 2015– Los Angeles, CA) – Making all of your nightmares come true … Varèse Sarabande will be releasing A NIGHTMARE ON ELM STREET 8-CD box set (limited 2000 units) on October 16, 2015.  This deluxe package contains all 8 soundtracks from the original series, over 8 hours of music including almost 3 hours of bonus tracks!  New artwork has been commissioned for the set (by artist Shawn Conn, http://atomicdeadguy.com/), and configuring the sleeves together forms a larger piece of art.  Before you have any nightmares, please don’t worry … the original Matthew Joseph Peak creations are included in the packaging. The set comes complete with the trademark knitted Freddy sweater encasing the outer box!
The world was introduced to Wes Craven’s Freddy Krueger (portrayed by Robert Englund) in 1984 with A NIGHTMARE ON ELM STREET.  Krueger was a former child killer seeking revenge against the parents who burned him by haunting the dreams of their teenage children and killing them in their dreams.  The series has earned almost half a billion dollars, worldwide, and boasts some of the most beloved, nightmarish themes from composers including: Charles Bernstein (Wes Craven’s A Nightmare On Elm Street), Christopher Young (A Nightmare On Elm Street 2: Freddy’s Revenge), Angelo Badalamenti (A Nightmare On Elm Street 3: Dream Warriors), Craig Safan (A Nightmare On Elm Street 4: The Dream Master), Jay Ferguson (A Nightmare On Elm Street 5: The Dream Child), Brian May (Freddy’s Dead: The Final Nightmare), J. Peter Robinson (Wes Craven’s New Nightmare), and Graeme Revell (Freddy Vs. Jason).
Also included in this set is a suite from the video game featured in the film Freddy’s Dead: The Final Nightmare and the theme from Henry Manfredini’s FRIDAY THE 13 TH series, as heard in the film FREDDY VS. JASON (with performances by the band Machine Head).
Pre-orders for the Varèse Sarabande A NIGHTMARE ON ELM STREET limited edition 8-CD box set will be taken beginning Friday, September 18 at www.varesesarabande.com. The boxed set will ship on October 16, 2015
Posted by D.M. Anderson at 5:25 PM