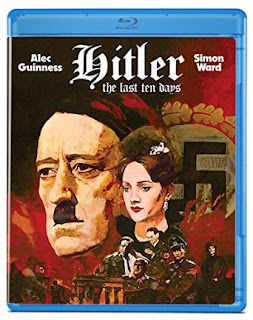 Another little oddity resurrected by Olive Films, Hitler: The Last Ten Days features Alec Guinness in the title role, practically gnashing the scenery as he rants, raves and pounds his fists while his co-stars look on helplessly, unable to compete for attention. Though his performance borders on high camp at times, Guinness himself always considered it one of his best roles (an opinion not shared too many others).

As the title suggests, Hitler's days are numbered, though he still behaves as though he's on the verge of total victory, hiding in a Berlin bunker with trusted generals, friends and advisors who often tell him what he wants to hear because they're afraid to concede Germany has no chance of winning the war. Hitler himself is depicted as a completely paranoid, overconfident, sexist, delusional megalomaniac (which he obviously was). Guinness attacks the role with the same over-the-top zeal as Faye Dunaway in Mommie Dearest, which is fine from an entertainment standpoint. In fact, the film becomes deadly dull whenever Guinness is off-screen. Even then, Hitler is mostly presented as a mere caricature of everything we already knew and suspected about him.


Since there’s little actual plot other than secondary characters discussing what’s going on outside the bunker, Guinness is the sole attraction here. As such, Hitler: The Last Ten Days is an interesting curio, especially to those who mostly associate Guinness with David Lean epics or as Obi Wan Kenobi in Star Wars (a role which, ironically, he hated). His performance is decidedly one-note, yet interesting just the same, mostly because he seldom ever played such a blatantly hateful character.