THE DEATH OF THE SUPERHERO MOVIE 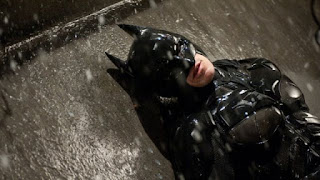 Face it folks, it's gonna happen. Not today, not tomorrow, not likely in the next year, but one thing is certain: The superhero genre is going to die, probably sooner than later (and long before Marvel is ready for it to end). Even the mighty Steven Spielberg has recently declared its ultimate demise when speaking with the Associated Press:

“We were around when the Western died and there will be a time when the superhero movie goes the way of the Western. It doesn’t mean there won’t be another occasion where the Western comes back and the superhero movie someday returns. Of course, right now the superhero movie is alive and thriving. I’m only saying that these cycles have a finite time in popular culture. There will come a day when the mythological stories are supplanted by some other genre that possibly some young filmmaker is just thinking about discovering for all of us.”

This death might not be be merciful or quick...it could be long, expensive and painful (if fanboys are lucky). One may even argue we're already seeing the first symptoms of that ultimate demise. Since both Marvel and Warner Bros (who owns DC Comics) have literally dozens of superhero films tentatively slated for release through at least 2020, they obviously do not believe the bubble is likely to burst anytime soon. They may be living in denial, however, and overly-optimistic about the genre's staying power. But offered as evidence are five distinct reasons why Spielberg is probably right:


1. Expectations
Guardians of the Galaxy was a happy surprise, a film based on a relatively obscure comic series which managed to transcend its origins and appeal to audiences on a massive level. Few moviegoers outside of the original comic's cult following appreciated the enormous risk Marvel took at the time, which of course paid off. But now the bar’s been raised, perhaps to an unreachable height. Exactly what will it take for GotG 2 to meet the now-lofty expectations of all these new fans? More of the same? Bigger and louder? Darker and grittier? Fans should probably be prepared for the filmmakers to second-guess themselves to the point where they forget what made the original so fun in the first place. While GotG isn't quite a superhero film, it’s happened countless times before in nearly every franchise you’d care to name. For example, Avengers: Age of Ultron, while enormously successful, is generally considered inferior to the first, bloated with too many characters and too much plot. And even though it’s now one of the biggest grossing films of all time (not taking inflation into account), it did not wow critics and audiences quite like the original. As these various superhero franchises lumber forward, the general sequel rule of diminishing returns likely means further disappointment is inevitable. One only needs to look back at the original Superman and Batman franchises as evidence.


2. Lack of Variety
Even if you’re the biggest superhero fan in the world, you have to admit there’s only so much you can do with the concept (which may arguably be why some properties are being rebooted so quickly these days, but more on that later). We’ve seen the light-hearted & funny, the big & epic, the dark & tragic, the realistic & gritty, the mash-ups, the cross-overs, the origin stories, the satires. But they all draw from the same well, that of an individual or team who, through various circumstances, fight for the masses in the name of justice. Beyond that, there isn’t a hell of a lot of room to think outside the box from a cinematic standpoint, a factor which ultimately killed the traditional western in the first place. Speaking of which...


3. Oversaturation & Fatigue
Marvel Studios currently pumps out at least two superhero movies a year, which does not include the other Marvel properties currently held by Fox (X-Men) or Sony (Spider-Man). Nolan’s brilliant Batman trilogy notwithstanding, studios are taking a dark path toward overkill, with Warner Bros hell-bent on pumping even more DC product into theaters over the next few years, which is somewhat distressing because Zack Snyder’s polarizing Man of Steel appears to be the springboard for a new cinematic universe. Considering the inherent limitations of the genre explained in point #2, that’s already a lot more superhero films than the average moviegoer is willing to digest before reaching the conclusion, “Been there, seen that.” It happened with slasher movies after Halloween and Friday the 13th, space operas after Star Wars and young adult fantasies after Harry Potter and Twilight. Furthermore, die hard fans of a particular genre make-up a relatively small percentage of actual ticket buyers, and once the casual masses have had their fill, that genre has historically always faded away. Considering the fact that budgets of these movies tend to be in the hundreds of millions, it isn’t going to take too many box office disappointments for studios to drop superheroes altogether. Speaking of which...


4. Decline in Quality
The recent critically-ravaged reboot of Fantastic 4 is one of the more notable box office bombs of 2015, which proves the Marvel brand alone is not necessarily an indication of quality. Kick Ass 2 was another recent critical failure, even though the original, while not a blockbuster, developed a strong cult following. Then there are other travesties like The Green Hornet, Green Lantern, X-Men Origins: Wolverine and the entire Spiderman reboot franchise. Some of these films made money, but all were pretty terrible. When you throw-in the noticeable dip in overall critical & audience approval of high-profile sequels (Thor: The Dark World, Iron Man 3), even a blind man can see the end of the road may be fast approaching. In this author’s humble opinion, the only superhero franchise that has so-far been consistently top-notch is Captain America. The point is moviegoers can only be suckered so many times by sequels noticeably inferior to those they once embraced. Even most die-hard fanboys won’t continue opening their wallets just because the main character wears a cape.


5. Reboot Resentment...Enough Already!
Christopher Nolan once performed a miracle by resurrecting the Batman franchise only eight years after Joel Schumacher’s godawful Batman and Robin appeared to kill it off.  Of course, it helped that his Dark Knight Trilogy was an artistic milestone in the genre by taking the series into a much different - and undisputedly darker - direction. But Nolan’s films are the lone exception in this current reboot craze, where the likes of Fox, Sony and even Warner Bros are now attempting to resurrect their franchises before the corpses of the old ones are even cold, with no noticeable difference in approach other than better CGI (and even then, I wouldn‘t put that to a vote). Sure, lots of older franchises are being rebooted right-and-left these days, but it currently seems to be most prevalent in the superhero genre (in movies and on TV). This practice simply reeks of an arrogant conceit that moviegoers will blindly swallow whatever comes at them, so long as there is a brand name attached. However, with the critical drubbing and lackluster box office that the latest Fantastic 4 received, perhaps we’re seeing the beginnings of a backlash from moviegoers who feel insulted by this cash-grabbing practice. If studios can’t come up with anything new, as apposed to rehashing the immediately familiar, what hope do superheroes have of remaining relevant onscreen in the next few years?

Sure, superheroes are the biggest subgenre in the world right now, but so were westerns at one time, as were 'big bug' sci-fi movies, gangster flicks, disaster epics and slasher films. Increased expectations, lack of originality, oversaturation and decrease in overall quality has ultimately been the death of every single genre that has ever gained cultural significance. Regarding superheroes, perhaps we’re seeing the first cracks in the armor right now. The genre has already enjoyed a fairly lengthy stay in our public consciousness (though not as long as the western, consistently popular from 1930 to 1970, give or take a few years). Since Hollywood has made it quite apparent (either narratively or financially) that all superheroes are invincible, they’re only course of action is to throw more money into a property and pummel everyone into submission until the slaves (us) have no choice but to revolt. It’s gonna happen, folks. Probably sooner than later. All it may take is one disappointing opening weekend from Batman vs. Superman or Avengers: Infinity War and the whole damn thing will collapse under its own weight.
Posted by D.M. Anderson at 9:58 PM